Stimulus – When Will We Pay for It? 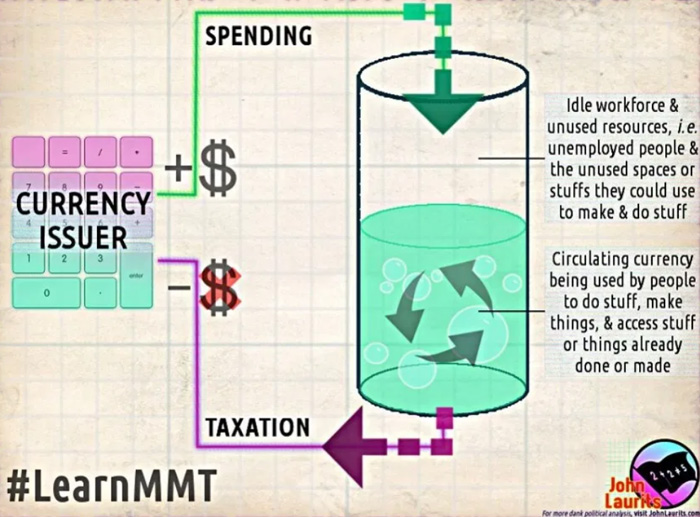 Modern Monitary Theory proponents liken an economy to a tub of water. The task of the government is to keep the tub full, but not let it overflow.

As we wait for our government to devise its next stimulus package, a stimulus intended to help us all cope with the fallout of the corona virus pandemic, we all wonder what more our government can do. We also where the money to finance all the support payments, whether to individuals or to business, is to come from.

Regular readers of this column may recall that several months ago I wrote here about Modern Monetary Theory (MMT). According to this theory, any government that has the ability to create money is not bound by the same constraints you and I are bounded by with respect to spending money. Any money you and I have needs to come from somewhere – we need to earn it or it needs to be given to us. A government also needs to get money from somewhere. Most of the money government spends is collected through taxes, but the government of an independent country also has the additional ability to create money.

Normally, if we have money we don’t want to use now, we deposit that money into the credit union. When we do that, we are, in effect, saying to to others, “here, I don’t want to use this money now. So you use it; later when I want yo use it, you will give it back to me.” In other words, just because we are saving, does not mean we are discouraging economic activity.

But if, instead of putting our surplus surplus into the bank or credit union, we were to put it under our mattress, it would have a different effect on economic activity. By putting our surplus under the mattress, we are in effect saying, “I don’t want to use this money at this time, and I don’t want anyone else to use it either.” In this case, by saving, we are discouraging economic activity. We are removing money from circulation.

The opposite is also true. Putting new money into circulation encourages economic activity. You an I can’t do that, but government can add money into the economy.

But that places sustainability advocates in a conundrum, doesn’t it? Let’s examine this apparent conundrum. Sustainability insists that we cannot have perpetual growth – that our prosperity cannot depend on a continuing increase in GDP. If we want to live sustainably, at some point we need to move away from a growth economy to a steady state economy.

I don’t have the final answer to this comundrum, but it seems to me we need to distinguish between types of activity and types of growth.

For example, growth in economic activity associated with the extraction of limited resources from the planet cannot be sustained, and should not be encouraged by a government stimulus package. This would include any action to promote the oil industry, including the subsidizing of pipelines and the bailout of airlines, to name the most obvious.

On the other hand, stimulus to encourage environmentally friendly activities needs to be applauded. Included here would be activity to decommission abandoned oil wells, research into low input agriculture, and other similar activity.

But I think we need to be cautious here. There is a lot of hype these days around renewable energy and electric cars. This may be a move in the right direction, but it won’t get us to where we need to be, because we need to find ways of living that use less energy. There is benefit in more energy efficient cars, but even more we need to learn to enjoy life even as we travel less. We need to learn to enjoy burning carbohydrates, not hydrocarbons. More than needing more efficient furnaces, we need smaller houses.

Our governments, at all levels, need to be applauded for the creative way they have responded to the economic stresses the COVID-19 pandemic has created. Now, as they need to deal with the deficit that has been created as a result of that response, we need to encourage them to be equally creative.

Pete's Landscaping provides soils, ground covers and aggregates to both residential and commercial projects in Steinbach and the surrounding trade area.