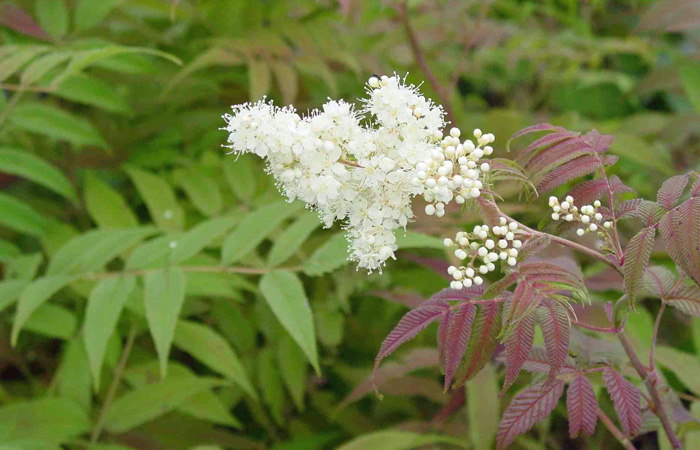 One of the most complicated parts of gardening is knowing which plant will work in which location. Every plant has a preference and specific needs. Some grow in shade, and other full sun. Sometimes plants need a well-drained area or prefer a damp one. The winter wind may be irrelevant to one plant, and yet completely freeze another. There are many variables to keep track of, but it is critical to your success.

The False Spirea is the plant of high tolerance. It will tolerate sun or shade. Wind stricken or sheltered. Hot or cool. Damp or dry. Rich or poor soils. The only thing that would really stress it would be moisture levels in the extreme. Extreme drought and never getting water or standing in a soggy area. So long as it is getting some kind of regular watering it is content.

The name, naturally, is deceptive. The False Spirea has no connection to the Spireas we are familiar with in Manitoba. There is a family of Spirea from Europe and parts of Asia that has a very upright white flower. It is called Steeple Spirea, or is also called Meadowsweets. The tall white flowers are quite similar to those of the False Spirea which grows native in Siberia and Japan. I imagine that as Europeans explored further to the east they discovered this plant that looked like their Spireas back at home. But it was not quite the same. So they named it accordingly.

While the blooms look rather alike the leaf has a very unique fern like appearance. They begin growing leaves very early in the spring, often before the last of the snow melts. The fresh growth has a reddish tinge on the tips, hinting at the fall colour that will reveal itself fully in autumn. The classic False Spirea will grow to a full size of 6′ tall and wide. But if this is larger than you would desire there is also the Sem False Spirea. It is essentially the little brother. It has the same resilience, flexibility and needs, but will only grow to about 4′. Its colour tones are brighter, and its flowers are more compact, but it is unmistakably from the same family.

There is one potential flaw in the False Spireas. While they have the ability to thrive just about anywhere they also have the potential to take over just about anywhere. The false Spirea is a vigorous grower and can put on close to 2′ per year, but they are vigorous on all fronts. Their root development is rapid and aggressive, often producing an abundance of sucker shoots. I have found many false Spireas that began growing a new stem from a drainage hole in the bottom of its container. Left to its own devices a false Spirea could grow to fill a 10′ wide area. The Sem-False Spirea would not spread as far as the full sized ones but is still quite effective at filling an area. And that can be the greatest flaw or strength of a False Spirea. Perhaps it is not the best choice for a flower bed, but it is an excellent option for filling up a corner, or taking on that area where nothing wants to grow.

You cannot stop a plant from suckering if it decides to do so, but there are ways to control it. You can always pull the suckers out when they are fresh. This is more effective than cutting them at the surface because it will break them off from the root and prevent them from coming back as quickly. You can always mow them over if they are spreading into your grass or till them if they are spreading in the flower bed. Another alternative is to set up some kind of barrier in the soil, like landscape edging, that will keep the spreading roots contained. The spreaders are nearly always in the top 4″ of soil. If you can have a 4″ deep barrier in place the Spirea can happily spread as much as it likes within its allotted space, but it cannot escape it. I personally find that suckering is a small price to pay for a plant that is so capable of thriving, and looks beautiful while it does it. The only question that remains in my mind is where will I find room to plant it in my own yard?