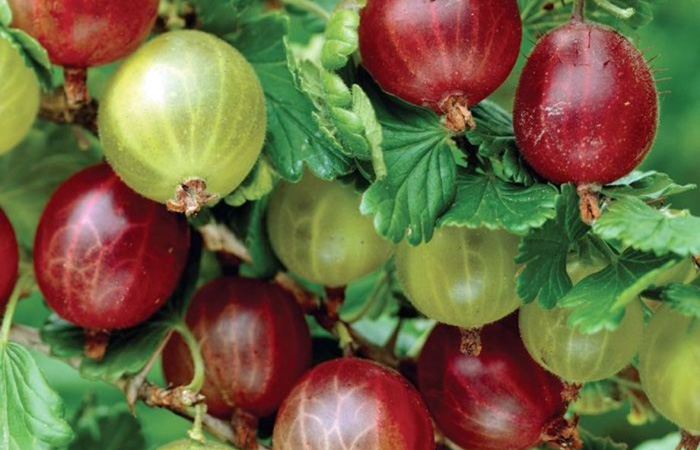 It’s all the name isn’t it. You think sweet supreme would be the name of a new cherry or peach. Well unfortunately captivator gooseberry bears the name gooseberry. Sometimes it’s hard to change your family reputation isn’t it!

For some reason unbeknownst to myself gooseberries have been known as the sour candy of the fruit world. Maybe we were just all too impatient to wait for them to ripen. If you eat them green they are the sour candies of nature. But gooseberries are meant to be eaten when they were red or purple.

The new generation of Gooseberry is a cross between the sweeter larger European Gooseberry and the American Hardy disease-resistant gooseberry. This nearly 1 inch fruit is growing on a 3 to 4 ft shrub that is nearly spineless. This fruit merits a second glance. Beginning with significant size, but more importantly flavour and sweetness are worth investigating. Secondly the plant is fully Hardy here in Manitoba. Thirdly it bears fruit within only two or three years of planting. It’s also disease-resistant. It is susceptible to a leaf worm which does not kill the plant but does the foliated. It can be controlled with pesticide or simply picking off the small worms when you start seeing them.

I have a sweet tooth when it comes to fruit, my favourites are sweet cherries and green grapes. I have to say this gooseberry impresses me. It is good for fresh eating, jam, and even pies. Another one of its assets is that it’s not a large and can be incorporated into your landscape easily whether you prefer it in a fruit orchard or in the general landscape. It prefers at least 6 to 8 hours of sunshine It is self furtile so one will do… until you taste it. Sweet supreme.