Mennonites at War: From Curiosity to an Exhibit – Part 1 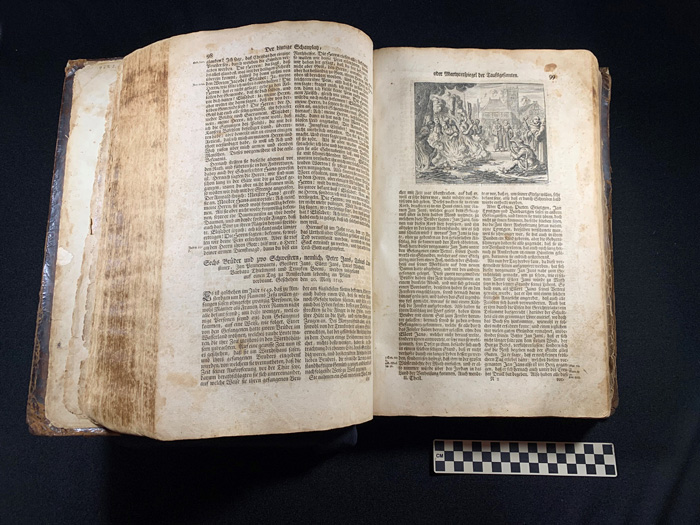 The Martyrs Mirror is a collection of the stories of Christian martyrs, from the beginnings of Christianity to the Anabaptists of the Radical Reformation. Thousands of Anabaptists were executed for their faith by both Protestants and Catholics during the sixteenth century.

Most exhibit ideas do not come in an instantaneous thought, but the basis for Mennonite Heritage Village’s (MHV) upcoming exhibit “Mennonites at War” came to me very suddenly about four years ago, when I was chatting with a friend of mine who works at two military museums in Winnipeg. As we talked, a thought bubbled to the surface: Mennonites so seldom talk about war and what it means has largely been lost on my generation. And just like that, the idea for “Mennonites at War” was born.

As this idea percolated over the next few years, the stories I had heard about the Mennonites who returned from military service being overtly or subtly rejected from their churches and/or their community raised more questions that led me to take a broader look at where the Mennonite belief in nonresistance comes from and how war, violence, and military participation – and Mennonites’ responses to them – have shaped and sometimes divided Mennonite communities. The exhibit will explore some of the ways Mennonites in Canada have been shaped by their responses to war and violence. The theme will be divided into four areas: “Martyrs,” “Migrants,” “Objectors,” and “Soldiers.”

My initial musing about how little Mennonites dwell on topics like war and military involvement was, of course, only partially correct. Mennonites have traditionally been known as people who oppose war and violence and who believe in nonresistance. This belief is deeply rooted in our history in the Radical Reformation of the sixteenth century. It is very graphically portrayed in Jan Luyken’s 1685 etchings of Anabaptist martyrs in Thieleman Jansz van Braght’s Martyrs Mirror, a book that has held a position of unique significance for Mennonites for centuries. In many Mennonite circles, this belief is still alive today and is a continuing part of the conversation about what it means to “be a Mennonite.”

Likewise, the traditional Mennonite stance of conscientious objection in the First and Second World Wars in Canada is often part of this conversation. The first Russian-descendant Mennonites to arrive in North America left at the threat that their exemption from military participation would be withdrawn in the Russian Empire. Mennonites who remained in Russia sought alternatives to active military service including forestry work and service aboard Red Cross medical trains during the First World War. In Canada, almost all young Mennonite men sought, and received, military exemption based on their membership to Mennonite churches. In the Second World War, Mennonites made up the vast majority of Conscientious Objectors (C.O.s) in the country. The generally accepted total of C.O.s at the end of 1945 is about 10,500 and of those, 7,500 of them were Mennonite. This Second World War story of conscientious objection is a major part of our collective Mennonite conscience.

What we do not often talk about is exactly what the title of this upcoming exhibit, “Mennonites at War,” alludes to: the Mennonite men and women who did join the military. Find out in next week’s Village News what is in store for this part of the exhibit.