Mennonites at War: From Curiosity to an Exhibit – Part 2 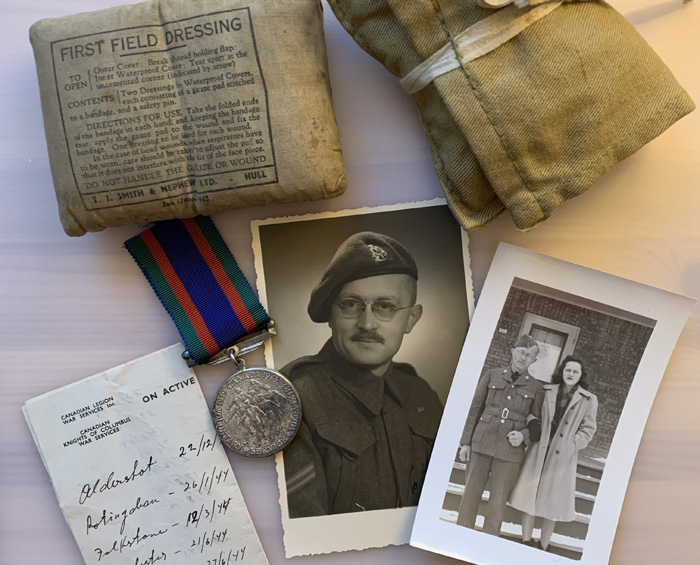 Some of MHV's artefacts relating to Dietrich Klassen's military service during the Second World War. As his family described him when they donated these artefacts, Dietrich was both a lifetime member of a Mennonite church in Waterloo, Ontario as well as a very proud military man.

Mennonite Heritage Village’s (MHV) upcoming exhibit “Mennonites at War” explores the various responses Mennonites have had toward war and violence over their nearly five-hundred-year history. Last week’s Village News focused on the more common part of the conversation: the Mennonite belief in nonresistance and being conscientious objectors to war. This week, we look at the part of the exhibit that will explore Mennonites who responded to war and violence by taking up arms and joining the military.

Historian and genealogist Glenn Penner notes that just over one hundred men with Low German Mennonite last names joined the military in the First World War. By the Second World War, on the other hand, approximately 4,500 Mennonites (including 55 women) were in active military service in Canada (Ted Regehr, Mennonites in Canada, 1939-1970, 56.) Although there were still more Mennonites who became Conscientious Objectors (about 7,500) than those who became soldiers in the Second World War, this is still a major increase in the number of Mennonites who considered military service a response to war that was consistent with their beliefs and world views.

This part of the exhibit will highlight some of the changes that took place in Canada during the inter-war years to create such a massive shift. It will also explore the fact that many Mennonite veterans faced either subtle or overt rejection from their churches and/or communities when they returned from the war. Mennonites did go to war in record numbers in the Second World War in Canada, but they also, figurately speaking, went “to war” with each other over the issue of peace. Many of those wounds may still not be healed.

There has been a lot of interest already generated by this exhibit, even before it has begun to take physical shape. Most of it has been encouraging, but I have encountered some resistance, with some individuals being concerned that focusing on the Mennonites who joined the military would somehow disregard or disrespect the many Mennonite men who chose not to go to war and the women – their mothers, wives, sisters, daughters – who supported them in this belief and bore the economic and social hardships that it meant for them. “Mennonites at War” is about the stories of individual people who responded to war, violence and persecution in a variety of ways: by suffering, by migrating, by opposing war, but also by taking up arms. To discuss any of these responses without looking at the others is an incomplete picture of what it meant to be a Mennonite in Canada during the times in our national history when we were directly faced with the question of how best to respond to war.

In looking at this topic from all these angles, we see that it is a complicated history and, I would argue, one that deserves attention from all these different points of view. My hope for this exhibit is that it would spark a conversation in our community. What does the Mennonite belief in nonresistance or pacifism mean today, if anything? How can we look at history in a way that is both curious about the past and compassionate toward it – especially toward the people who made choices with which one might not agree? How do we relate to, and get along with, people with points of view that differ from our own? These are not just questions that deal with the past. We need only to look at today’s headlines to see that these questions are absolutely relevant in our increasingly divisive and polarized social dialogue around many contemporary issues.

This exhibit has been four years in the making and I look forward to inviting our community to see it when it opens in late May. I hope the exhibit will be an invitation to consider with an open mind a past that can sometimes be uncomfortable and to ponder what this history might be telling us about how we live with one another today.