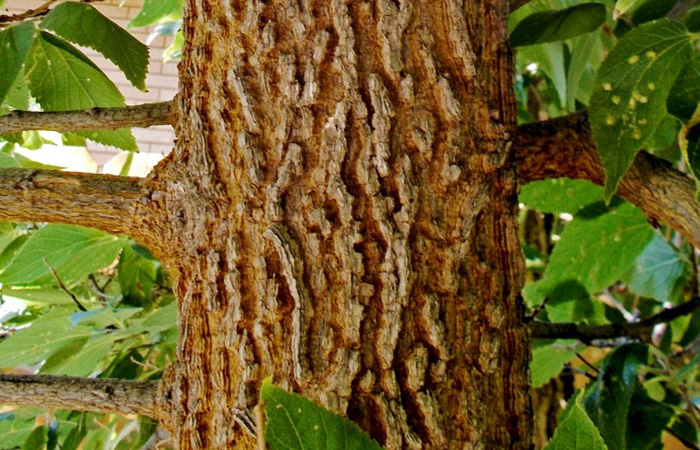 Have you ever heard of sugarberry / hackberry tree? If so, you’re in the minority. This seems a little odd as it is a native tree, though more common and more used in Minnesota, North and South Dakota. It is an outlier in Manitoba with only one known local location South of Lake Winnipeg.

Some native range Maps do not even include this location but it is the most northern site where it grows naturally. Possibly brought in hundreds of years ago by migratory Birds.

It’s commonly called sugarberry south of here and I like that name better than hackberry. Hackberry sounds like something that catches in your throat. Definitely not thinking about the marketing when they named it! Although the berries are sweet and considered palatable between the skin and pit there’s pretty much nothing to taste. Some birds and butterflies are attracted to the tree though. As far as aesthetics go to hackberry has a similar structure to green ash, though slightly broader. Growth rates are somewhere between ash and elm. They are a little slower to take off but do well in most soil types. As I always preach, moisture, weed control and nutrients improve the growth rate of everything… significantly! They do reasonably well in the Red River Valley. High PH and clay soils do not scare them off, for that reason they make a better choice than silver maple. It’s important to have a source from a well-formed tree. I have seen some… well “bad hair day” sugarberry’s.

We’ve selected seed off of a boulevard in Steinbach. We chose only seed from the nice upright formed parent plant.

As the emerald ash borer scare has people moving to other varieties hackberry has caught the eye of many. We must learn the lesson not over plant anything. Every plant will have an achilles heel show up sooner or later. This tree has interesting bark, makes a nice shade or shelter tree but has probably not been selected because there are no outstanding features. Fall colour is plain yellow growth rate is average so why not go with the low-hanging fruit first. That would have been elms with fast growth, brilliant gold, and high tolerance for almost everything. Green ash is extremely cold, salt and pH tolerant. So we keep going down the line to find the next best tree. I encourage planting this Hardy native but not at the exclusion of other options as well. For the average homeowner having a tree that needs a little extra water during a drought spell isn’t the end of the world. Linden’s birch and silver maple make fine specimen trees but not great shelterbelts. Sugarberry could be included in shelterbelts with other trees like emerald ash bore resistant ash trees, dutch elm resistant elm trees, Manitoba maple, poplar and eillow and possibly ohio buckeye. If diversity catches your eye you may consider adding dugarberry to your repertoire.

Steinbach's Flooring Canada, experts trained in flooring sales and design that will help you find the perfect floor for the way you live.