How Not to Explore the Arctic 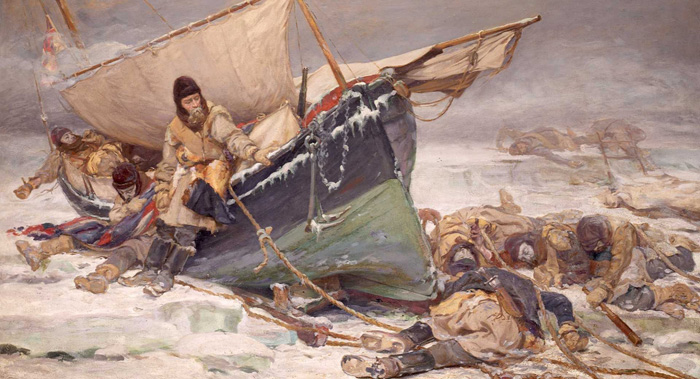 On the morning of May 9th 1845, H.M. ships Erebus and Terror set sail with a crew of 129 men from Greenhithe, England on an ill-fated arctic expedition to find the Northwest Passage to the Orient. Captain John Franklin led the mission which would end in the death of the entire crew. From the outset, the mission was seemingly well-equipped. Each ship had a steam-powered engine and central heating system, as well as three years’ reserves of food including, among many other things: 97,500lbs of meat; 136,700lbs of flour and 9,300lbs of lemon juice. The mission is thought to have failed ultimately due to a series of unexpectedly cold winters, combined with the effects of lead poisoning. But I think it can be argued that there was another, even more fundamental cause: Lack of imagination.

It’s not that these men were not inventive, resourceful, or clever. They certainly were all of these and more. But on the day they departed, they did not imagine living very different than they were familiar with at home in England. Although they were venturing into a hostile, new land, they spent their energy and resources not to live like the natives they had met on previous excursions. These previous experiences could have taught them how to dress, travel by dog sled, and generally how to cope with reality in the Arctic. But Inuit witnesses reported seeing the last remnants of Franklin’s men dragging heavy boats on sledges over the ice, laden with silverware, watches & books. They were wearing no furs, and were too heavily burdened to keep up with the Inuit who helped them, but could not save them. Later expeditions would finally adopt the lifestyle, diet & dress of the Inuit in their search for the lost party. But this was only possible because they relinquished the ideal of what a “true” Englishman must be, and because they became willing to part with their own traditions.

In the coming quarter of the 21st century, western civilization, together with the rest of humanity is embarking on a new voyage. For better or worse, the landscape we are entering will not be familiar. Many of the comforts and resources that we take for granted will be withdrawn as we discover that what seemed like an infinite planet, is not. By the time our young children are 80 years old, the planet may be scarcely habitable. In contrast, the last century has been one of extraordinary abundance – for Canada and other western nations – driven mainly by the phenomenal power of fossil fuels to extract, process, and transport goods. But this power and the resources it liberated will not last. Venturing into this new future will require us to imagine our lives differently, if we wish to avoid Franklin’s fate.

One way to do this is to consider our energy use. Anyone who does not consider energy one of, if not the most important natural resource, is embracing the same naive view of the physical world as Franklin’s ill fated crew. Like us, Franklin’s crew considered energy something that simply needed to be supplied. They developed technologies to furnish it, but when their situation changed, they sadly discovered that excessive energy dependency is lethal. Later explorers learned from the Inuit. Imagine those sailors dragging boats across the ice and ask yourself, if our energy situation changes, how long will you stay in your centrally-heated “ship”? How will you live in a way that you never considered before?

Another way to imagine this new territory is by mentally doing without much of what we own that was made on another continent, or with foreign materials. How realistic is it to believe that air conditioners, rubber tires, medical supplies and year-round fresh produce will always be there whenever we want them – cheap and readily available? And when our supply chains are upset by a pandemic, or political unrest, or bad weather, or any of a thousand other things – how different will we behave than Franklin’s crew locked in the ice?

Franklin prepared for his voyage just as some of us do today. Rather than accepting that he would live differently and with less, he prepared by trying to bring his old life with him. But English uniforms and furniture, books and silverware, and all the trappings of tradition only weighed him down.

Today, at the outset of our own one-way voyage, let’s consider what our lifestyle assumes now: cheap energy & resources, freedom to pollute, complex international monetary and political systems… If, like Franklin, we prepare for our future assuming that we can bring all these things with us, then we will likely share his hard fate. If, on the other hand, we realize that the future can be as different from today, as different as Inuit life was from Victorian England, we’ll be better prepared to make the best of it.

If we begin to adapt now, we could even learn to appreciate some aspects of a tougher, simpler life today.