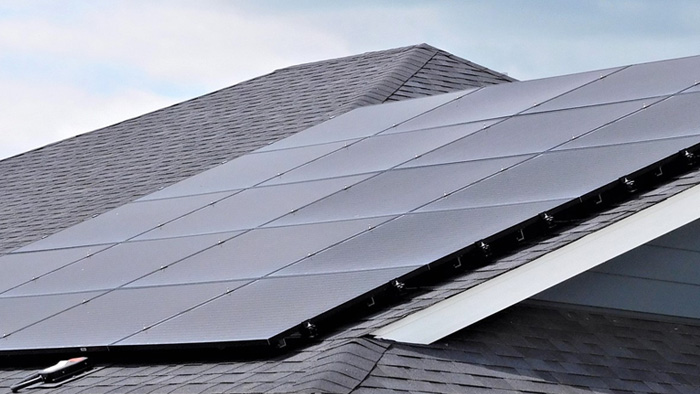 I have been interested in solar energy for several years. In 2017 we visited a show home with solar panels and this provided me with information and contacts for a pilot project in which Manitoba Hydro provided a rebate of $1 per watt and accepted a bi-directional electricity meter for a solar system on a new house.

Approximately 20 Manitoba companies installed solar photovoltaic (PV) systems, which produce electricity from sunlight. We chose Solar Manitoba and have received very good service from them. I have heard of others using other companies also with good success.

The roof tilt, 6 in 12, is well suited for solar panels, both for electrical production and for shedding snow. Solar Manitoba advised me that the tilt angle is close to optimal for this latitude. There are other rules of thumb, for instance your degrees latitude is the optimal angle from horizontal for your solar panels. A roof-mounted system generally lies flat on the roof. A free-standing solar system, however, could be tilted at any angle. For instance, if the house is off-grid, the solar electricity might be most important in the winter, and so the best tilt position could be much more upright, because of the lower angle of the sun.

The Manitoba Hydro program limited our solar system to the annual electricity usage, calculated at 27,700 kWh for a house the size of ours. A solar system sized at 20.3 kW would provide for all of our house energy needs. The two roofs, to the south and to the west, provide enough space for such a system. We ordered a 5.8 kW system for now. The system represents 29% of the house’s projected annual energy consumption.

The solar system provides continuous data storage of electricity production, and daily, monthly, annual and total electricity produced. The data is also shown in other useful forms, including a display of real-time production for each panel in the array. This information is also available through an app on a smart phone.

The solar system’s output is not available to the house in case of power outages, to ensure safety of hydro personnel working on the grid. Emergency use would be possible with the addition of a sizable battery, for example a house battery, and other equipment.

The solar system has been in place for two winters, and I have cleared the snow from the panels only once. Normally, any accumulated snow has melted from all panels in a matter of a few days. It should be noted that for the last two winters, the months of November, December and January showed average solar output valued at 70 cents per day, which doesn’t warrant being too fussy about snow clearing from a ladder, especially if one were to hire someone to do the work, which is what a 70+ year old homeowner should do. The system has functioned very well, without maintenance or repair of any kind. The panels have a 25-year manufacturer’s production warranty.

The solar system was projected to have a 5.6% annual rate of return at a constant electricity rate, with a considerably higher rate with increasing electricity prices. The system is expected to pay for itself easily within its expected life time, expected to be at least 25 years. The environmental benefits are significant.

Our experience with the solar system so far indicates that it is and can be expected to continue to be a solid success. I look forward to expanding our system when Manitoba Hydro’s energy buy-back rate will match the purchase rate for such an expansion.