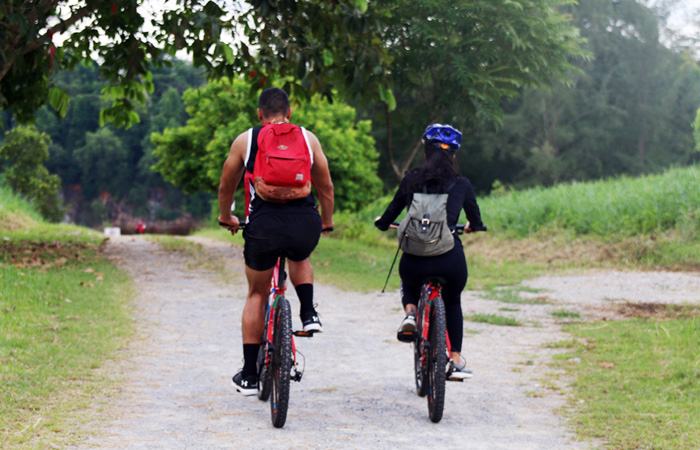 Bicycles are incredibly energy efficient at moving passengers and cargo from one place to another. How efficient? Imagine that you’re driving along the highway at 100km/h in your SUV, and you approach a red light just as you notice a friend of yours travelling by bike. What would happen if, rather than converting all your speed to heat by applying your brakes to stop for the light, you could flick a switch and “donate” all your kinetic energy to your friend (gently, of course) and give him a boost to his destination? How far would your waste energy push him? On a flat road with no wind he could ride travel 28 kilometres at 24 kph without pedalling once – just from your wasted brake energy at that one stop. If you were driving an F150, your weight would carry him and his bike 37 kilometres. That’s the equivalent of a trip from Steinbach to La Broquerie and back again!

But a bicycle is more than just an efficient form of human travel – it is a revolutionary leap to all locomotion on Earth. In a March 2015 article in Bike Boom magazine, Carlton Reid writes how Steve Jobs was struck by this fact, and compared this leap of technology to the invention of the computer:

“I read a study that measured the efficiency of locomotion for various species on the planet. The condor used the least energy to move a kilometre. And, humans came in with a rather unimpressive showing, about a third of the way down the list. It was not too proud a showing for the crown of creation. So, that didn’t look so good. But, then somebody at Scientific American had the insight to test the efficiency of locomotion for a man on a bicycle. And, a man on a bicycle, a human on a bicycle, blew the condor away, completely off the top of the charts. And that’s what a computer is to me. What a computer is to me is it’s the most remarkable tool that we’ve ever come up with, and it’s the equivalent of a bicycle for our minds.” ~ Steve Jobs

Reid goes on to write that philosopher Ivan Illich was also inspired by the same article that Jobs mentions: a 1973 Scientific American article by S.S. Wilson. In 1978, Illich wrote:

“Man on a bicycle can go three or four times faster than the pedestrian, but uses five times less energy in the process. He carries one gram of his weight over a kilometre of flat road at an expense of only 0.15 calories… Equipped with this tool, man outstrips the efficiency of not only all machines but all other animals as well.”

“Bicycles let people move with greater speed without taking up significant amounts of scarce space, energy, or time. They can spend fewer hours on each mile and still travel more miles in a year. They can get the benefit of technological breakthroughs without putting undue claims on the schedules, energy, or space of others. They become masters of their own movements without blocking those of their fellows. Their new tool creates only those demands which it can also satisfy. Every increase in motorized speed creates new demands on space and time. The use of the bicycle is self-limiting. It allows people to create a new relationship between their life-space and their life-time, between their territory and the pulse of their being, without destroying their inherited balance. The advantages of modern self-powered traffic are obvious, and ignored.” ~ Ivan Illich

The first electric car was invented circa 1890, and is only today becoming the new must-have status symbol. My bet is that the modern “safety bicycle”, invented in 1885 by John Kemp Starley, has only begun its rise to dominate all forms of human locomotion. As global resources diminish, you can be sure that the bicycle will continue to gain attention for its astonishing efficiency. Efficiency that it delivers with elegance and simplicity.