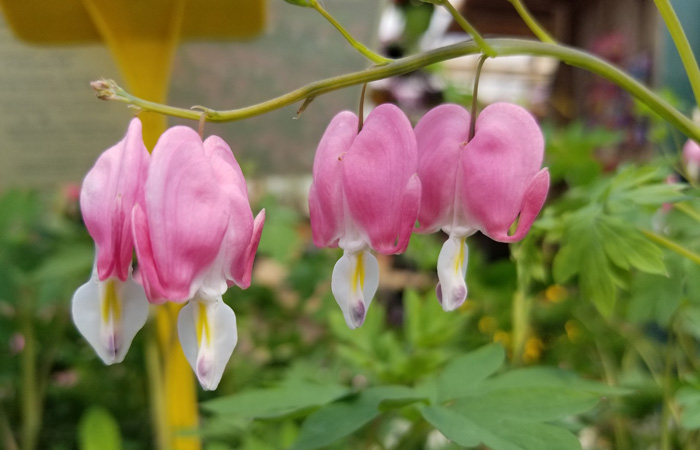 I must admit this plant probably made many garden enthusiasts’ hearts bleed as it simply couldn’t be found this year. The Bleeding-heart perennial was such a popular item last year that this year our suppliers were short handed on stock and we sold out of our last few before the end of May with the promise that none would return for the rest of the year. It was a real tragedy. However, while we wait for the stock to replenish, we can still talk about this beautiful plant.

The first thing to always note with Bleeding Hearts before buying one is their tolerance. Tolerance for moisture, tolerance for heat, for sunlight, etc… Bleeding Hearts are very shade tolerant and do not appreciate much sunlight, especially the hot afternoon sun. When Bleeding Hearts experience too much sun and heat, they will begin an early dormancy, starting as early as the end of spring. So, it may look like your Bleeding Heart has died very early, but be patient and wait for next spring, there is a high chance they simply went dormant early, if they don’t come up next spring then I would consider looking into a replacement. Also, if your Bleeding Heart does go into an early dormancy I would recommend a location change, chances are it’s getting too hot or too much sun in the current location. Bleeding Hearts are also very sensitive to moisture, too much water and soggy soil turns a Bleeding Heart into a sad, mushy, yellow thing. However, they will only tolerate dry soil for so long, there is a very specific balance of moisture needed to keep them happy, but get the conditions right and you will never regret the little bit of work it took to make this plant happy.

The lovely blooms of the Bleeding Heart live up to the name growing in the shape of a heart with a little white petal on the bottom that looks like a drip. Thus, looking like the name, Bleeding Hearts. Bleeding Hearts come varying shades of pink, red, yellow, and white. The flowers themselves are almost like a little pillow, they grow hollow on the inside making them very soft and almost bouncy to touch. Honestly as a kid I have memories of sitting beside my mothers Bleeding Hearts plant and gently squeezing the flowers between my fingers to feel deflate and bounce back into shape. They were so soft and pretty! I remember asking my mom if I could make earrings out of them to which I was informed that the flowers would die probably before my little hands could even figure out how to make earrings, ha-ha!

Bleeding Hearts are native to Japan and Northern China and were discovered by the Royal Horticultural Society and brought back to England to share their beauty with the world in 1846.

A fact I have only just learned is that Bleeding Hearts buds and flowers are toxic to both humans and dogs causing symptoms of vomiting and seizures, so please keep this in mind when buying these flowers. Thankfully most people don’t feel the sudden urge to just go and eat a flower but if you do steer for the Begonias instead.

Penner Trailers, located in both Steinbach and Winnipeg, provides sales and service for a large selection of new and used trailers.