Can We Manage Our Population? 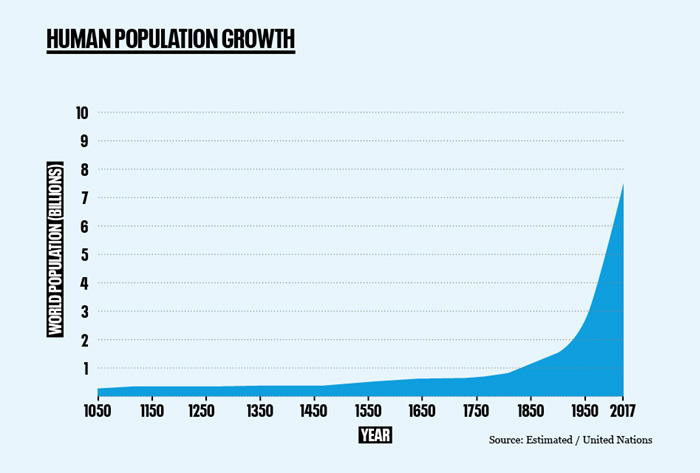 Demographers tell us that prior to 1700 AD the total world population was consistently below one-half billion people. Since large families were common, why is it that the population did not rise above the one-half billion? The answer is simple: pandemic, famine and war.

History is written by the victors, So we learned about thriving populations and military conquests. In the Old Testament story, we know about Joseph and his brothers who migrated to Egypt in response to a famine and survived. We know nothing about the people who did not get to Egypt and did not survive. We are all familiar with the stories of the colonization of the Americas, but know little about the effect European infectious diseases had on the American indigenous population.

The Black Death was responsible for the death of one-third of the world population. This was the second large outbreak of the bubonic plague, and possibly started in Asia and moved west in caravans. Other plague sufferers arrived in the port of Messina, in Italy, and from there it spread throughout Europe rapidly. Dead bodies became so prevalent that many remained rotting on the ground and created a constant stench in cities.

Following the arrival of the Spanish in the Caribbean, diseases such as smallpox, measles and bubonic plague were passed along to the native populations by the Europeans. The indigenous people had no previous exposure and no immunity, so these diseases devastated these people, with as many as 90 percent dying throughout the north and south continents.

Upon arrival on the island of Dominican Republic and Haiti in 1492, Christopher Columbus encountered the Taino people, population 60,000. By 1548, the population stood at less than 500. This scenario repeated itself throughout the Americas.

Wikipedia in an article entitled “Famines in Ethiopia,” lists 30 famines since 1535. these famines occurred because peasant farmers were living from harvest to harvest. Only since 1973, when the World Food Program, together with various non-Government Organizations became involved in food relief, did this pattern changed.

As we all know, the world population has grown dramatically since 1700. By 1800 it was one billion, two billion by 1928, and nearly 8 billion today. This growth has occurred because of modern medicine and modern agriculture. Modern medicine has reduced deaths and modern agriculture has resulted in the production of more food. Growth has been possible as never before.