Parting Ways: Why did Mennonites Leave Canada in the 1920s? 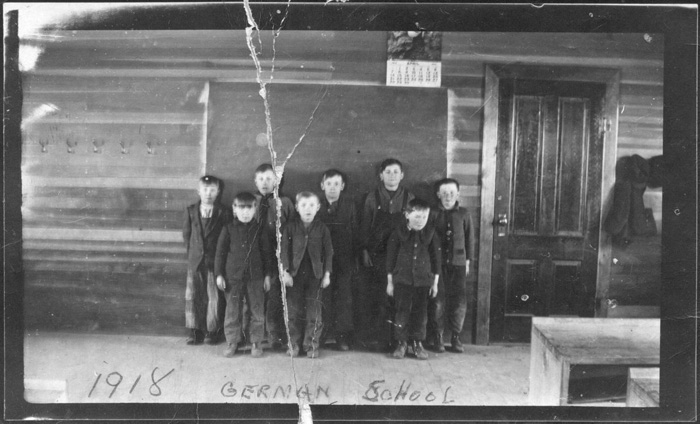 Eight boys inside the Mennonite school in the Neu Kronstal district, north of Plum Coulee, Manitoba, in 1918, when the issue of private schools divided their community. The families of at least two of the boys in this photo, Isaak Fast and Jacob Hildebrand (fourth and fifth from the left), joined the migration to Mexico. (Photo credit: Mennonite Heritage Archives, 031-2.0)

In the 1920s, nearly 8,000 Mennonites left Canada for Latin America in search of a new home that would give them what Canada no longer would, including control of their own schools. Long before Canada adopted the official policy of “multiculturalism” in the 1970s, laws passed in Manitoba (1916) and in Saskatchewan (1917) used the public school system to assimilate children from immigrant backgrounds to be loyal and patriotic British citizens. Mennonites, who traditionally rejected military participation in any form, wanted to protect their religious freedom and culture and many felt they had no choice but to leave Canada, believing that its roots in British imperialism and militarism were too deep. In Mennonite Heritage Village’s (MHV) upcoming exhibit, “Leaving Canada: The Mennonite Migration to Mexico,” we explore different perspectives on this migration.

Traditionalist Mennonites in Manitoba and Saskatchewan resisted the new school laws by petitioning, appealing, and boycotting the new public schools, which resulted in heavy government fines. Failure to pay could lead to confiscation of property and even jail time. According to Maclean’s journalist Charles Christopher Jenkins, “the government broke up Mennonite schools and fined [Mennonites] severely – sometimes they took the last horse and the last meat out of the house to pay the fines.” (Jenkins, “The Mennonites’ Trek,” in “Maclean’s,” Feb. 15, 1922)

What motivated this migration? Some Mennonites felt they were being tested by God and they needed to reaffirm their loyalty to a traditional, separate way of life within their own community of steadfast believers. By emigrating, they felt that they were exercising “freedom of conscience” and expressing an authentic faith. Looking back on the 1920s migration to Mexico in his memoire decades later, Isaak M. Dyck, a minister in the Reinländer (or “Old Colony”) Mennonite Church in Manitoba, linked Mennonite private schools with their freedom to practice their religion. He wrote: “[W]e were afraid that if we shared our schools – the place where seeds are first sown in the human heart – with the world, then our churches would not be able to remain separate. …Our forefathers always took the school question very seriously, because they understood well that what the school is, the church will become.” (Dyck, Auswanderung von Canada nach Mexiko, ano 1922, Robyn Sneath, trans., [Cuauhtémoc: Imprenta Colonial, 1995], p. 115.)

Do you or your family have an artefact or photograph with a link to this unique chapter in Mennonite history? If so, MHV needs your help! We looking for partners from the community who are willing to share their stories in the exhibit. We are looking for objects related to any of the following topics: the migration to Mexico and Paraguay in the 1920s; connections maintained between Mennonites who left Canada and those who remained behind in Manitoba and Saskatchewan; the return migration of Mennonites from Mexico to various locations in Canada, including Ontario, Manitoba, Saskatchewan, and Alberta, beginning in the late twentieth century.