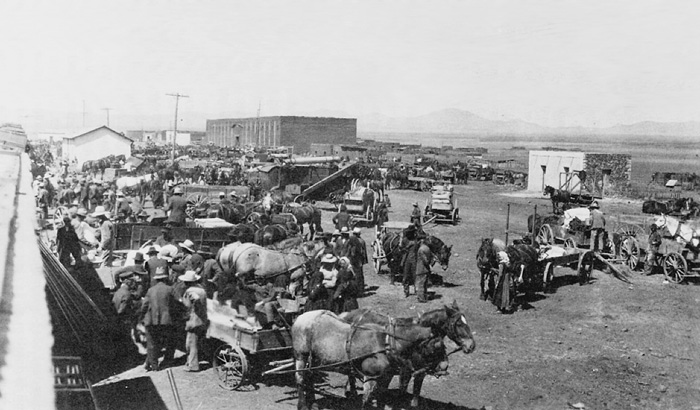 What is the price you would pay for your freedom of belief? Throughout Mennonite history, this question was answered hundreds of thousands of times by individuals who faced it – in very real ways. Many times, the answer came in the form of uprooting their entire lives and moving elsewhere at great cost.

We are familiar with thinking about this question with regard to Mennonite experiences during the Radical Reformation in the 1500s or later in Russia and the Soviet Union during the nineteenth and twentieth centuries, but we are likely not as comfortable thinking about it in relation to Canada. But in the 1920s, nearly 8,000 Mennonites left Canada for Latin America in search of a new home that would give them what they felt Canada no longer could, including freedom to practice their religion and retain their way of life through educating their children in private schools. In Mennonite Heritage Village’s (MHV) upcoming exhibit, “Leaving Canada: The Mennonite Migration to Mexico,” we explore different perspectives on this migration.

Mennonites faced many hardships in the early years in Mexico. When Mennonites arrived in Chihuahua, they were not sure what to expect. The journey had brought them through steep mountain passes into a dry, dusty, foreign landscape. Families spent the first weeks in tent villages before they were able to build small wooden homes and many struggled to make ends meet. In addition, crop failures, a lack of clean water, and poor drainage during the rainy season led to serious epidemics of malaria, typhoid, and smallpox in those first years.

As newcomers, Mennonites had to learn new ways of life. During the first decade, Mennonites learned from their Mexican neighbours and began to adapt their practices to the new landscape. While their first houses were built of wood brought from Canada, for example, they soon learned that it was better to build with adobe (dried mud) bricks. Farmers learned that staple crops like wheat were not suited to the Mexican environment, and they had to change their diet, economy, and farming techniques, like corn and beans.

Conflicts with neighbours and governments and violence following the Mexican Revolution were major challenges in Mennonite villages in Mexico well into the 1950s and beyond. Conflicts with “agraristas” (peasants seeking land reform) in the 1920s, a crisis involving Mennonite school closures in the Manitoba Colony in 1935-1936, and aggression against Mennonites and their property into the 1950s were very challenging.

All these hardships caused some Mennonites to quickly return to Canada, but most found these difficulties bearable because Mexico had guaranteed their religious freedom. Years later in his memoires, Isaak M. Dyck, leader in the Old Colony Church, suggested all the hardships Mennonites experienced in Mexico were worth it. He wrote: “In Mexico we found what we had lost in Canada, namely: full freedom of conscience and expression of our religion, as much in the schools as in the churches.” (Dyck, Auswanderung von Canada nach Mexiko, ano 1922, Robyn Sneath, trans., [Cuauhtémoc: Imprenta Colonial, 1995], p. 115.)