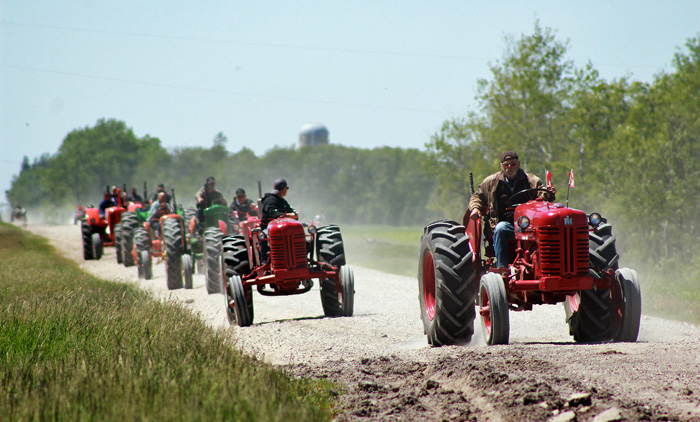 For those who grew up on farms and drove tractors that were manufactured before 1970, Mennonite Heritage Village’s (MHV) Tractor Trek offers a lot of nostalgia. On June 11 there will once again be a parade of tractors roaming the south-east countryside in support of MHV and Eden Foundation. In the early 1900s these beasts of burden held a closer ratio to cars. For example, at its peak in 1951, over half a million tractors were produced in North America, while 5 million cars were sold. That is a ratio of one tractor for every ten cars. Today, including all automobile types, the ratio is more like one tractor for every 150 vehicles. Back then some farmers bought a tractor before they ever owned an automobile.

In the Big Book of Farmall Tractors, it shares this about the history of the early tractor: “To the farmer, the invention of the tractor was almost as important as the invention of the reaper. It was Cyrus Hall McCormick’s reaper, introduced in 1831, that initiated the power farming era, when mechanisms became a substitute for physical strength and an individual could accomplish more in a day than several men could have previously.” We take them for granted today, but those tractors were revolutionary when introduced.

The 2022 Tractor Trek will be the thirteenth consecutive trek (it is the one MHV event that COVID could not stop) where vintage-tractor owners and enthusiasts canvass friends and acquaintances for pledges and then drive their tractors more than 50 kilometers to earn those pledges. Usually, we have 40 to 50 tractors registered and around $40,000 raised at the end of the day. A big thank you in advance to all drivers and their donors!

This year the route will go around Blumenort, Greenland and then turn back after lunch in Ste. Anne. For the full route map and times see our website events page. It is quite something to be at the side of the road when all those tractors come rumbling by. At the end of the day there is usually a dinner and an awards ceremony for the drivers.

Apparently, for many years during the 1920s and beyond it was common to see many farmers each spring make their way to the train station in Giroux and drive their new tractor home. I guess you could say, that was the original tractor trek in south-eastern Manitoba. Do you know of anyone with an old tractor who might join the next Tractor Trek?