The Latin American Legacy of the Mennonite Migration to Mexico 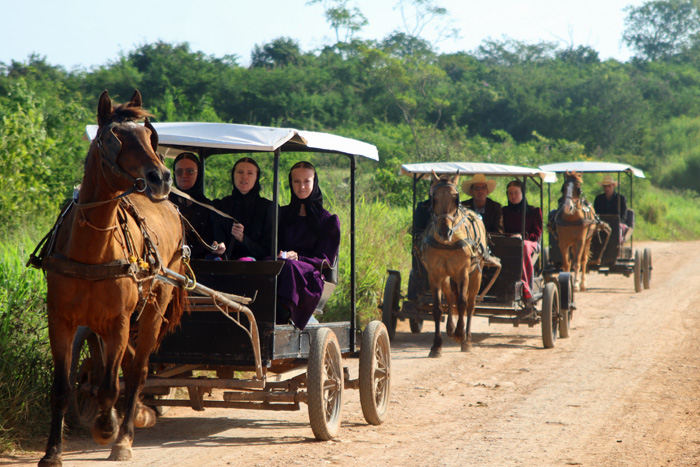 Pictured here are three buggies with rubber tires. The use of rubber tires instead of the traditional steel wheels has been a point of division in many Old Colony communities. In Mexico in the 1930s, a colony decided to prohibit further changes to their way of life, including forbidding rubber tires. Anyone who disobeyed the ruling was seen as onnjehuarsom (disobedient). Some Mennonites used tractors as they came from the manufacturer, thereby using rubber tires and defying the rules. This eventually caused Mennonites who wanted to follow the traditional way of life to leave Mexico for Bolivia in the 1960s. (Credit: Kennert Giesbrecht)

“The only thing that could preserve our simplicity in Christ would be if we were to again take to the walking stick. But where would we go?” ~ (Isaak M. Dyck, Auswanderung von Canada nach Mexiko, ano 1922, p. 25)

The continuing legacy of traditional Mennonites is one of migration and diaspora. One definition of diaspora is “the movement, migration, or scattering of a people away from an established or ancestral homeland” (Merriam-Webster). Mennonites have been a people of migration since their origin. Due to persecution, Mennonites had to constantly be on the move to live freely and avoid torture and death in the 1500s and 1600s. In the late 1700s, Mennonites left Prussia for Russia, where Catherine the Great promised them freedom of religion, exemption from the military, and control of their schools. These promises were starting to be revoked one hundred years later, leading Mennonites to search for a new home once again, this time travelling thousands of kilometres across western Europe, the Atlantic Ocean, and eastern Canada to land in Manitoba. Mennonites who left Canada have continued this tradition of migration and, subsequently, diaspora as they have spread out into different colonies and communities.

In the 1920s, about 8,000 Mennonites left Canada for a new home in Mexico to protect their traditional way of life, most notably, their schools and education system. Life was not easy for those who left. A small number of Mennonites returned to Manitoba and Saskatchewan almost immediately after leaving. In the following decades, a growing number went back to Canada, many of them seeking work as seasonal farm workers in southern Ontario. While there were no Old Colony communities in Ontario at the time, as more Old Colonists stopped migrating seasonally, they set up permanent settlements. By the 2010s, over 40,000 Old Colonists were living in Ontario year-round. As migrations back to Canada continued, Old Colonists continued spreading into more remote areas, like northern Alberta and throughout western Canada.

At the same time as Mennonite life in Canada was changing, the migration to Mexico was only the start of a series of migrations throughout Latin America. In the 1950s, as some Mennonites were returning to Canada, many others were moving further south, deeper into Latin America, starting with Belize (1950s), Bolivia (1960s), East Paraguay (1970s), and Argentina (1980s). Lack of economic opportunities, divisions in churches, and disagreements between community members on whether they should continue following all their traditions or adopt modern technology have all been driving factors in these secondary migrations.

Traditionalist Mennonite communities continue to resist assimilation in the modern world, despite the many challenges it poses and live in communities throughout North and South America. Today, nearly 300,000 descendants of the original 8,000 Mennonites who left Canada in the 1920s live in communities throughout the Americas. Some still live the traditional life that their ancestors wanted to protect. In contrast, others have chosen to adapt and have incorporated modernity to varying degrees in their lives and communities.

“Leaving Canada” is an exhibit produced in partnership with MHV, the Plett Foundation, and the Mennonite Historical Society of Canada.