The Best Thing Since Sliced Bread 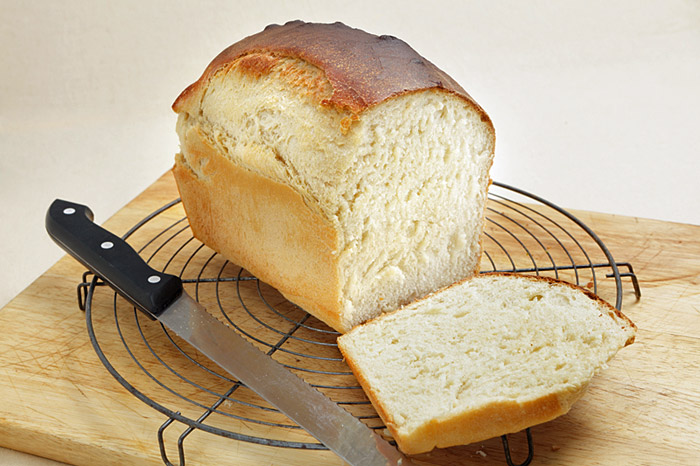 When I was a kid, my mom never ever made bread. I doubt that my grandmother even made bread because they lived in a city with bakeries and grocery stores. Don’t get me wrong – Mom home-cooked everything for us. She gardened, she canned and she baked… but when it came to making anything with yeast, that was just too much. Too much time and too unfamiliar, I guess. So I grew up on store bought bread and, really, that was OK with me. When I tasted it on rare occasions, home-made bread was often kind of bland. The slices were thick and crooked, and it tore when I tried to butter it.

But later on, I started to want something better than store bought. I got a breadmaker at the thrift store, and I started making my own bread. Breadmakers are awesome. True bakers will scoff at them, and justifiably so. They’re for newbies. Everyone eventually donates one to the thrift store (maybe I have yours). But that doesn’t mean they’re not awesome. Think about it: how many inventions can turn basic ingredients like flour, water, yeast, oil and salt into a finished product – from start to finish – on their own? Never mind that you can set the timer so that you wake up to the smell of fresh bread in the morning. Quite a nice thing for the bachelor that I was at the time, I can tell you.

What about the problem of bland, weak, crooked fat-pieced bread? Well first of all, the machine’s manual included a good recipe. “Good” means that it had enough salt in it, and that it was very specific. Bread needs salt not to taste salty – but to taste like bread. It also needs an exact amount of flour. Always fluff up your flour to measure it, or better yet, weigh it. As for weakness, fresh bread is just deliciously easy to tear and that’s all. Still, butter stored on your counter won’t drive you crazy like cold butter will. And lastly, I bought a good bread knife and practiced slicing my bread nicely. If you haven’t either inherited a good knife or spent at least $20 on one, then you might as well use your toaster cord to cut the bread.

That was over ten years ago, and the outcome of my experiment was this: Once I got the hang of it, making bread became easy and routine. I ate bread all the time. Fortunately for my health, the novelty wore off after a while and I started making it less often. But by that time I could taste inferiority of store-bought bread and couldn’t bring myself to go back to it. Since then, I’ve been making the occasional loaf for company, which always goes over well. We use Prairie Flour Mills (Elie, MB) flour from Sobey’s, sometimes mixed with 1/3 home-ground flour, which I highly recommend for nutrition and for the ability to eat organic, local grains very affordably. (DeRuyck’s Top of the Hill Farm delivers 20kg grain bags to Steinbach, or look up Adagio Acres). In any case, we found that using a machine with anything other than store-bought flour is tricky to get right. If you want to make really great bread, at one point you’ll probably come back to the oven. And that’s just fine, because by that time you’ll be so accustomed to the joy of fresh bread and the process of making it that it will be natural to you. Home-ground whole wheat, marble rye, French baguettes, even sourdough breads will all seem more achievable – and for good reason. You will have conquered the “I can’t” illusion that keeps you buying inferior, plastic-bagged, “preservatived” department store bread. You don’t know what you’re missing.

As for our family today, we use either the oven or the machine, as the case requires. Oven loaves are nicer-looking and don’t have a paddle-hole in them like machine loaves do. Sometimes we splurge and buy our bread at local artisanal bakeries (Old Church Bakery, for one). But if you want to start making bread, I suggest a trip to the thrift store for a breadmaker. If you want to start without that, try making a “no-knead bread” like the recipe from ‘Jo Cooks’, online. It uses idle time instead of work to make an amazing loaf you won’t soon forget.