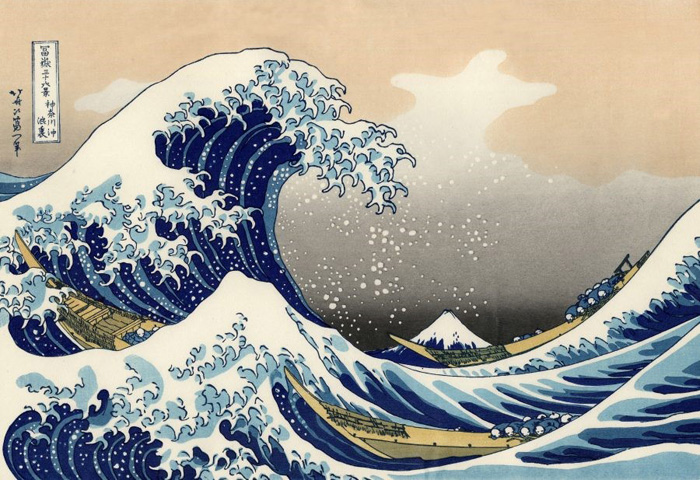 The Great Wave Off Kanagawa (a.k.a. The Great Wave) by Katsushika Hokusai (circa 1829-1833); Metropolitan Museum of Art (available to public at Wikipedia)

Thesis 1: There is no objective truth.

This means that truth can’t be a relation between what one believes and what is actually the case independently of what one believes, so one cannot be mistaken about what is real. (One can only be “inauthentic,” i.e., not in touch with one’s feelings, which leads to thesis 2.)

Thesis 3: Disagreeing with someone is the same as hating that someone. Witness the negative reactions on some university campuses to speakers expressing views contrary to the views of students, faculty, and administrators.

Here’s the perfect storm: I am whatever I feel – and you’re a bigot for challenging that.

Let’s put some flesh on this storm.

Recently, white American man Adam Wheeler, who now calls himself Ja Du, has decided he is transgender and Filipino. And people are defending Ja Du’s status as a Filipino woman.

How so? Here is journalist Cathy Areu, who has a BA and an MS in English, is publisher of Catalina magazine, and defends Ja Du on Tucker Carlson’s talk show (5 minute video available here):

“It’s what’s on the inside that counts, not what’s on the outside. There’s a growing movement. There’s many people that are now identifying as the other gender and as another culture or race or ethnicity.”

“If this person’s not hurting anyone, then what’s wrong?”

“If you’re identifying as a woman and you’re not hurting anyone, there’s nothing wrong with that. If you [a man] want to be a woman, that’s fine, that’s perfectly fine.”

Didn’t we used to call this delusional? “It’s 2017. It’s OK now to be transracial and transgender. We’re accepting. We’re an open society. We’re a modern society.”

What if you have a friend who thinks he is Napoleon: “That’s OK!”

So it’s not a sign of mental illness, but a sign of personal actualization? “Absolutely! As Ja Du says, it’s what’s inside that counts… it’s that person’s choice.”

Folks, this is a perfect storm – of insanity.

To weather this storm, please think about the following (Facebook comment) from Robert Gagnon, former professor of New Testament at Pittsburgh Theological Seminary:

“Caucasian man identifies as Filipino woman, at once ‘transsexual’ and ‘transracial.’ Woman publisher defends it as a very ‘American’ thing to do (because we all know that Franklin, Washington, Adams, Hamilton, Jay, Jefferson, Madison, Lincoln, et al. embraced these notions).”

“Who does this harm? For starters, it messes up children by indoctrinating them into the gnostic nonsense that biology has no bearing on reality. It penalizes with loss of employment, fines, and threats of imprisonment anyone who does not acknowledge (indeed, celebrate) these lies to be true.”

“It forces the whole of society to subsidize sickness and falsehood. It harms the persons who are mentally troubled by feeding the self-dishonoring behavior and convincing them not to get the help they desperately need. It makes a mockery of programs designed to help women and ethnic minorities.”

To navigate safely back to sanity we need to set our compasses on objective truth and the careful use of reason.

Note: “Perfect Storm” was originally published in The Carillon (November 22, 2017) and republished in Political Animal Magazine (January 2018). The author holds all publication rights.

For additional thought about the transgender issue, see the following installments of Hendrik’s column “Apologia”: