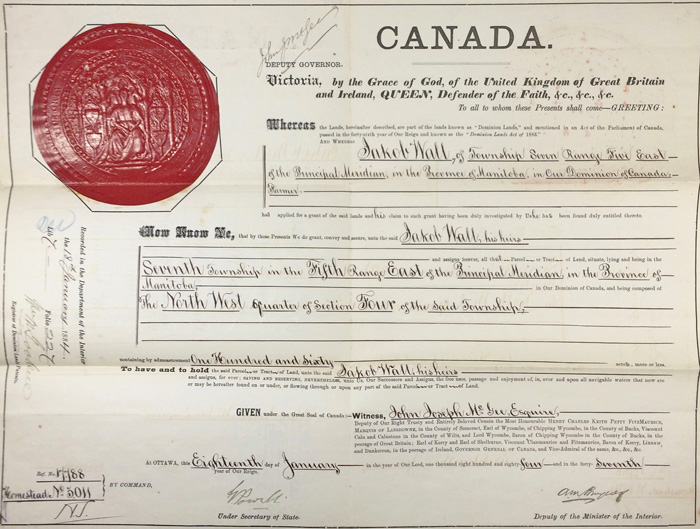 On January 18, 1884, Jakob Wall was granted 160 acres of farm land by the Canadian government. Ten years earlier the first Mennonites in Manitoba had begun to establish homes and farms on land given to them by the Canadian government. Although the location of the new settlements may have appeared to be “empty space” to the new settlers, in reality it had been home to over six hundred generations of First Nations people, as well as the Metis nation.

This past August marked the 147th year of the signing of Treaties 1 and 2 between Canada and the Anishinabek and Swampy Cree of southern Manitoba, and Canada and the Anishinabe of southern Manitoba, respectively. These treaties and the Manitoba Act of 1870 were meant to protect the rights of Indigenous claims to land as Canada continued to grow westward. Unfortunately, many of these promises were broken, or simply never kept, resulting in generations of marginalization of Indigenous communities.

After the Treaties were signed, the Canadian government implemented incentives for European immigrant groups to settle the land that had become available through these policies. The Mennonites were one of these groups. They were granted large blocks of land (the “East Reserve” in 1874 and the “West Reserve” in 1875), where they could freely live out their religious beliefs and cultural practices in relative isolation from the rest of society. The policies that benefited Mennonites and other immigrant groups resulted in the removal of Indigenous communities from their home lands and led to the death and suppression of thousands of First Nations people. The legacy of these policies has impacted generations. The 2015 report of the Truth and Reconciliation Commission of Canada (www.trc.ca) outlines the ways in which Canada is still coming to terms with the roles played by the federal and provincial governments, churches, organizations, and individuals in this history and its implications on our country today.

At Mennonite Heritage Village (MHV), we typically focus on celebrating the way of life, beliefs, and culture of the Mennonites and their success in Manitoba. Sometimes, this celebration has come at the cost of neglecting the relationship between Mennonites, Indigenous communities, and colonialism. Perhaps the most common myth that has been perpetuated in Mennonite history is that the land upon which they settled was not just uninhabited but also “unused” and not properly cared for, and that Mennonites then made it productive through their success with agriculture. Although in recent years scholars have been addressing this myth in great detail, it can still often be too easy to uphold it when commemorating the successes of a community.

Another aspect of Mennonite settlement that often goes forgotten is the personal interactions that the Mennonites had with First Nations and Metis communities on the prairies. For example, the Mennonite delegates scouting land for the East Reserve in 1873 were guided by a Metis man from the area, and it was the Metis who were hired to carry Mennonites’ belongings on ox carts when they first landed in Manitoba, at the junction of the Rat and Red Rivers in 1874. Katherina Hiebert, who became the first midwife on the East Reserve, exchanged skills and knowledge with Indigenous midwives in the area.

While these types of encounters between Mennonites and First Nations people can be found in archival sources like diaries and records left by midwives, oral histories, local histories, or artefacts in a museum’s collection, they are often hard to find. Sometimes sources only hint at the existence of interactions and relationships between people.

For example, a medicine chest that once belonged to Ältester Franz F. Enns, on display in the Permanent Gallery at MHV, hints at the possibility of collaboration or a transfer of knowledge between Mennonite and Ojibway healers. Enns had practiced homeopathy in the Terek settlement in Russia and then continued his practice after he and his family immigrated to Manitoba. The hypothesis of interactions between Mennonite and Ojibway healers is based on the similarities of the herbal sources and remedies noted in Enns’s accompanying notebooks during the time he practiced in Manitoba. To date, however, it is just that: a hypothesis that leaves us with many unanswered questions. Sources like the records left by midwives or the Enns medicine chest require much more research into the life and relationships between Mennonites and First Nations people in the early years of Mennonite settlement in Manitoba. They also, however, invite us to reconsider some of the myths we may have believed about Mennonite settlement in Manitoba and to view our present world and the co-existence of our cultures in Canada in a new light.

As a community that is proud of its heritage and its past here in Manitoba, it is appropriate to commemorate our history. However, we also need to remember the circumstances that allowed our ancestors to settle here beginning in the late nineteenth century. It can be difficult to accept that the opportunities and successes of the Mennonites in Manitoba were aided by policies that favoured the colonial agenda in Canada. Nevertheless it is vital that MHV, as an historical institution, I as a curator, and the Mennonite community at large, continue to examine the full Mennonite settlement experience and the relationship with colonialism that began in the past and continues in the present.