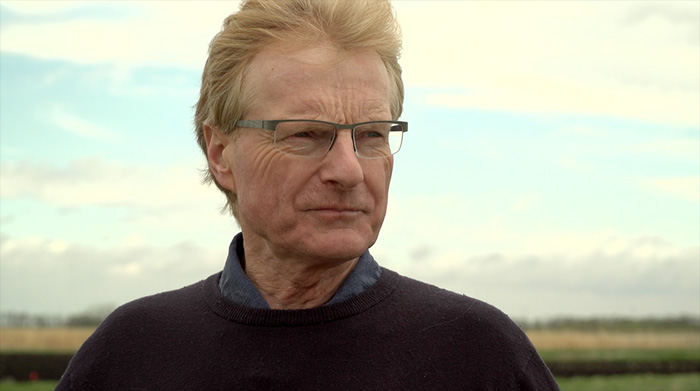 Dr. Martin Entz - a professor of Cropping Systems and Natural Systems Agriculture at the University of Manitoba.

When I asked Dr. Martin Entz, professor in the Plant Science department at the University of Manitoba how he had arrived at his current position and what had influenced him to do what he does, he immediately said, “I remember my grandfather taking me for walks in our pasture at Ste. Elizabeth. He showed me all the different plants and pointed out the birds and the bugs.” Martin went on to explain that he was fascinated by the diversity he saw in a simple pasture field.

This early influence was always at the back of his mind as he chose his education and subsequent jobs. Dr. Entz chose to go to the University of Saskatchewan to study how winter wheat behaved in zero tillage systems and received his Ph.D. degree there. Martin loved the idea of reduced soil disturbance because of what he had learned about the life in the soil. Zero tillage had gained more acceptance in Saskatchewan than in Manitoba because it was drier there and

After completing his graduate studies Dr. Entz took a position at the University of Manitoba as the forage agronomist. Partly he was in the right place at the right time because Dr. Anna Storgaard was retiring as forage agronomist, but also because forages fit into his vision of what a farm should include. Martin believed that diversity on a farm was a long-term benefit. Forages introduce diversity of life cycles to the farm. Most of our farms plant only summer annuals like wheat, canola, soybeans and corn. Introducing forages brings perennials into the rotation, and perennials bring diversity. Diversity aids in the control of weeds, reducing the need for herbicides. Diversity also contributes to nutrient cycling and general soil health.

Another early influence in Martin’s life was Dr. Wes Jackson who visited the University of Saskatchewan when Martin was studying there. Wes Jackson has, for his entire career, sought to perennialize our annual crops. He has made significant advances in developing a perennial wheat and Dr. Martin Entz was influenced to introduce some of that wheat into his crop rotations as it became available.

Martin’s concern for the well-being of the soil and the well-being of entire farm lead him to focus his research attention on organic systems and the introduction of livestock into those systems. As Dr. Entz’s published papers exposed him an acknowledged organic and farming systems researcher, young people from around the world sought him out to study with him. These highly motivated, intelligent people continued to inspire Dr. Entz’s program and allowed him to flourish.

Dr. Martin Entz’s dream is to be inclusive in his research and to make it applicable to all farms and farmers. This is why he is starting to talk about “beyond organic”. Martin believes that we need to highlight and name the positive practices that many farmers are already practicing. Practices like good crop rotations, reduced tillage, reduced pesticide use, and incorporating a diversity of crops and livestock on the same farm.

Significant and substantive change will only occur if the changes are sung about and reflected in the culture. The good news is that the songs are beginning. Dr. Martin Entz sited Monika Wall, a Manitoba singer who is becoming a cultural influencer for the good of the Earth.