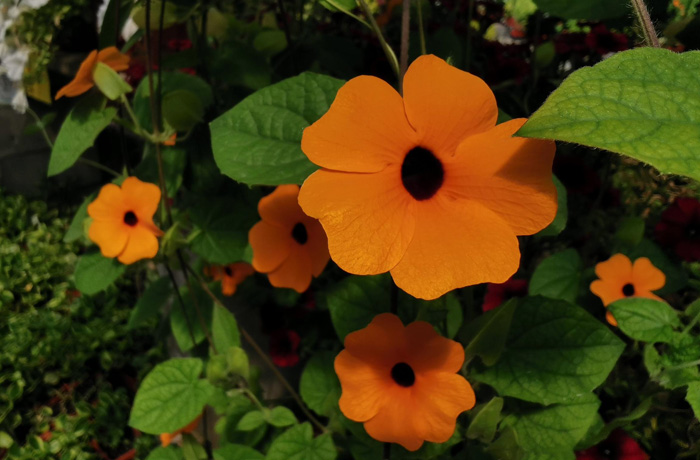 Though here in Manitoba we ogle over the beauty of the Thunbergia vine, in other parts of the world it is just your common weed, just another invasive species that is difficult to eradicate.

Thunbergia was discovered by Carl Thunberg on his journey set by the Dutch to discover new plants. Thunberg was a young student with a passion for botany. On his journey across the world Carl Thunberg stumbled across a gorgeous plant he had not yet set eyes on. Clock vine, Grandiflora, Alata, all different species later to be tied to the name Thunbergia, named after the discoverer. In the corners of South Africa Thunberg discovered the beauty of a wild vine that could not and would not be contained.

In some areas where the flower is local it is simply a headache, a vine that could never be stopped. But in the areas where it cannot withstand the cold we simply get a gorgeously cascading vine filled with vibrant blooms and heart shaped foliage.

Thunbergia is often the favorite when it comes to annual vines; aggressively growing making a lovely mound of brightly coloured blooms. Lemon yellow, vibrant orange, deep red and many colours in between; this vine is hard to compete with. Often Thunbergia is best in a basket or on a trellis, giving it space to climb and trail as it so desires. Heat and sun loving, these flowers are great as a centerpiece in sunbeds, on a shepherd’s hook, or climbing up that really sunny side of your shed. Their tolerance of moisture can make it tricky if your yard is quite soggy or there is heavy rain, however Thunbergia are very quick to bounce back, particularly from drought.

All this aside I genuinely believe that they are worth any little bit of work they require. Aggressive in their nature, Thunbergia often can take over its area and beyond, so make sure that when planted you give it lots of its own space, or else it will take over its neighbour’s space too.

Thunbergia Alata, commonly known as the Black-eyed Susan vine, is the most common of the thunbergia family for North America. And though here they are just decorative, Alata’s sister Mysorensis (Clockvine) and Grandiflora have many more purposes in their home countries beyond decoration. Mysorensis Thunbergia has been known to be used as an anti-inflammatory also known for being used to treat poisoning or to battle addictions. And although our little Alata thunbergia does not hold any known medical properties, it does hold the properties of beauty!