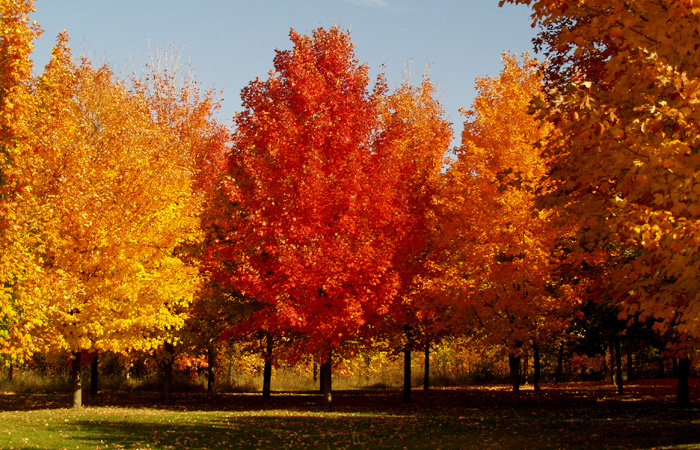 Now where did we leave off? Ah yes, Fall colour that has been bred for our Province, if we can provide enough shelter. Many varieties have been popping up from the different researchers, all desperate for that gorgeous red fall colour we see in other Provinces or countries. It’s been a long haul, and sometimes hit or miss. However there are some varieties succeeding in Manitoba, Maples in particular. Maples such as the Selkirk select, Unity, and Inferno, all from Jeffries Nursery in Portage Manitoba, and the Northern flare coming from North Dakota State University in North Dakota. Red Maple are also native to the area of Minnesota as well as Northern Ontario. I have personally seen them in the Fort Frances area as well as Sioux Narrows. They are even sprinkled around the northwest corner of Ontario.

Jeffries Nursery has recently introduced a selection called Prairie Rouge, and some day will introduce the Scarlet Jewel, red rocket, and red spire. These varieties have, so far, been successful for me in sheltered spots, though I must say high pH can create some issues. In the line-up of colourful trees there are also crosses of Silver Maples with Red Maples now available. These tolerate high pH a little better than some of the newer breeds coming out. They can attribute their tolerance to their silver maple parent and their beautiful fall colour to the Red Maple parent.

Autumn Blaze, however, is probably the most prominent of the breeds at this time. It comes from a couple of States south of here, so it does need extreme shelter. It has a notable upright structure and a good growth rate. The fall colour is always consistently fire engine red. It’s even seedless! The only downfall is their lack of cold tolerance. They crack or can die easily. I would never try them where they’re exposed to the north and west winds.

Regal Celebration came onto the scene about two years ago. It has good fall colour and has been tested for many years here. The only downfall is that it’s a slower grower then Autumn Blaze. Let me be clear though, it is not slow growing at only a foot and a half to two feet a year, but also not growing three or four feet per year.

The Red Oak family has a lot to offer us as well. At this point the only tried-and-true selection would be shooting star Northern Pin Oak. It is faster growing than our Native Oak, but it would not be considered a fast-growing tree. The fall colour is a blood red to burgundy red. Another newcomer that has proved them-self worthy is Nobility Ash. The fall colours on our trees have been brick red to burgundy with some purple hue. It is a fast-growing tree with a beautiful form, but if emerald ash borer becomes a challenge here it could be jeopardized. We do not discourage planting it randomly but would discourage plunging headlong into this selection. I can’t give a time frame but I do know there could be White Oak family members and new varieties of Elms to add to the spectrum of reds, oranges, and burgundy in the future.

The last species I want to talk about would be Ohio Buckeye. This tree is hardy in most sites. It’s not fussy about soil, has interesting non-edible nuts, uniquely palmate leaves and colours up anywhere between gold to orange to red. It is a medium grower similar to Northern pin oak, not fast but definitely worth planting.

Fall has become one of my favourite times of the year. When the sun shines on a calm day the temperatures can be perfect for working or going for a walk. And now rather than dreading school I look forward to the brilliant colours that are beginning to make their presence in our challenging environment. I hope you are encouraged to trial some of these new and colorful options. With a little helpful information you too can have great success in painting your town red.