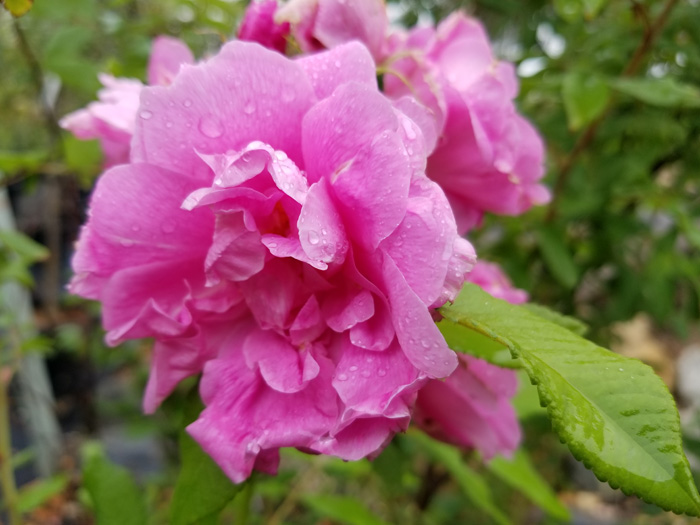 It does not take a linguist to realize that French and Latin just have a smoother tone than German or Dutch. So if I say the name of this Rose in English, it will definitely lose something. It is spelled Therese Bugnet… How am I supposed to sell that? Bug Net? Well, you ask anyone who speaks French to pronounce it and it sounds how it supposed to. Amazing!

The best news is that this Rose sells itself by its looks and easy care alone. Therese Bugnet has a Zone 2 hardiness. This means it can take up to -45 in stride! It will grow approximately 5 to 6 feet tall and wide. Now a quick reminder, yes this is a rose, so it has some thorns. However when it produces hundreds of blooms in late June, no one notices the thorns. It’s kind of like saying, “Oh look Miss America has a pimple!”

We haven’t even talked about the colour. This rose pops out in dark pink buds, opening to fuchsia pink flowers then fading to a light pink. The blooms lasting between 2 and 4 weeks. Late June to Mid-July is usually warm and 2 to 3 weeks is all you’ll get. On occasion when the weather is cooler. You could see it bloom for 4 weeks. After that, it will bloom randomly and lightly until late July, August, and even into late September. But the show is not over once the blooms fall. During late September and October Therese will colour up her leaves, bring an orange and burgundy fall colour to the landscape as well. Lastly it does set 3/4 inch reddish orange rose hips by August. These will stay on through late fall. Now that’s a complete package, bountiful blooms and fall colour!

As for easy care as long as it’s not soggy and it gets moderate moisture this plant will do very well. You can plant it on the south, west, or east side of a building. Another option is in the wide open spaces, Therese Bugnet it is cold as well as heat and drought tolerant once it is established. It can be shaped and sheared early in spring and again after the first flush of blooms or in late fall. It is also relatively Pest and disease-free.

I suggest you ignore the English name and think slightly more romantic French thoughts about this Rose. Bonjour!