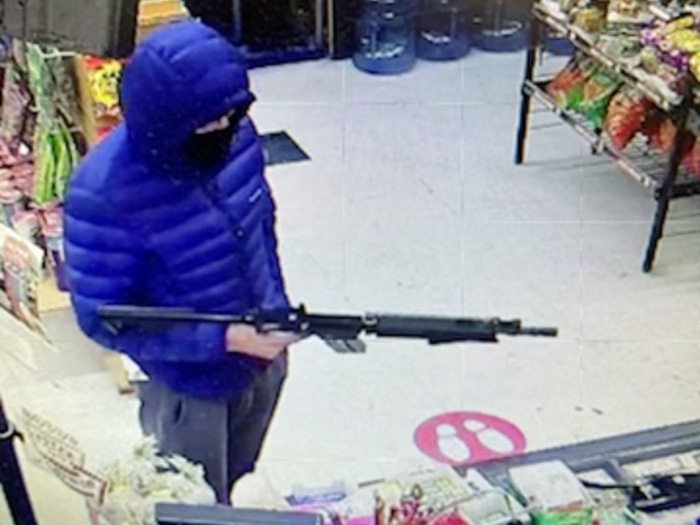 Suspect with a weapon caught on security camera robbing a gas store.

Steinbach RCMP, along with St. Pierre-Jolys and Oakbank members, are currently investigating numerous robberies that have recently occurred at various locations in southeast Manitoba.

In the afternoon hours of December 12, 2021, Steinbach RCMP received a report of a stolen vehicle that occurred earlier the same morning at a residence located on 1st Street West in Steinbach. The victim reported that his grey coloured 2010 Honda Civic, with Manitoba plate KPC 722, was stolen from his property.

On December 13, 2021, at approximately 10am, Steinbach RCMP responded to a theft complaint at the gas station located in Mitchell. It was reported that a suspect, described as being in his 20’s, wearing a black toque, mask and a hoodie, filled up his vehicle and left without paying for the gas, a quantity of cigarettes and other consumable items. The vehicle, driven by the suspect, was identified as the stolen vehicle from Steinbach.

On December 15, 2021, at approximately 9:40am, St. Pierre-Jolys RCMP responded to a report of a gas theft, involving the same vehicle, at a gas station located in Lorette. The suspect was seen wearing a black toque, mask and hoodie.

Shortly thereafter, at 10:20am, St Pierre Jolys RCMP responded to a report of a robbery at the gas station located in Tourond on Highway 59. The same vehicle was seen driving onto the property. The suspect entered the store with a firearm and demanded cash. The suspect was wearing a mask, a blue jacket and grey sweatpants and made off with an undisclosed amount of cash.

Later that afternoon, at approximately 3pm, Oakbank RCMP responded to a robbery at a restaurant located at Deacons Corner. The suspect entered the restaurant with a firearm and demanded cash. He then made off with an undisclosed amount of cash in the same vehicle.

At 4:45 pm, St. Pierre-Jolys RCMP received a report of a vehicle fire located off of Highway 1 on Municipal Road 29 E in the RM of Tache. Police believe this vehicle to be the one stolen earlier and used during these incidents reported above. The suspect remains at large.

RCMP believe the same suspect to be involved in all of these incidents and are asking anyone who may have information which could help identify him, to contact the RCMP East District CREST unit at 204-482-9699.