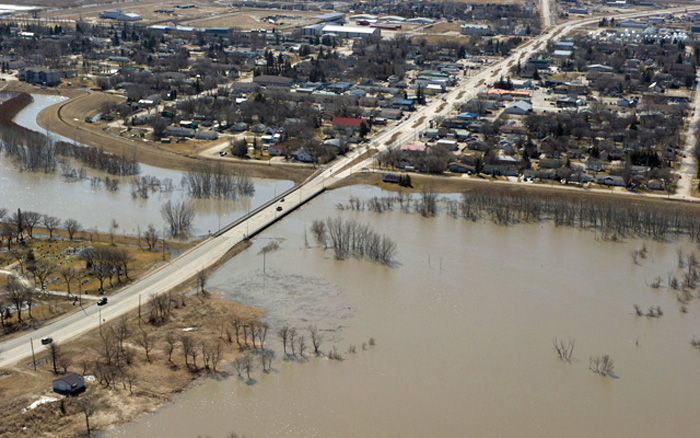 Manitoba Transportation and Infrastructure’s Hydrologic Forecast Centre has issued a flood warning for St. Jean Baptiste, Morris and areas surrounding the two towns with potential of some overland flooding in low-lying areas due to rising levels of the Red River.

A flood watch has also been issued for the Red River from Emerson to St. Jean Baptiste and from Morris to the Red River Floodway inlet just south of Winnipeg as river levels continue to rise in these regions.

A precipitation system is forecast to bring up to 30 millimetres of precipitation (rain and snow mix) in most parts of southern Manitoba including the United States portions of the Red River basin and tributaries. This forecast precipitation together with the gradual snowmelt occurring in the Manitoba portion of the basins could raise levels above their bank-full capacities at some locations within the Red River Valley. Water levels have already exceeded bank-full capacities at St. Jean Baptiste as of this morning.

The forecast peak flow of Red River at the floodway inlet with forecast precipitation is estimated to be between 45,000 and 57,000 cubic feet per second.

Standard operating procedures for the Red River Floodway gates require river ice to be broken up and cleared upstream of the floodway inlet. River ice observations indicate the ice is likely to clear by the end of the week and could create favourable conditions to operate the floodway if needed. In addition, provincial crews are deployed in a number of communities in the Red River Valley to regularly monitor basin conditions and assess potential dike closures.

Water levels along the Assiniboine, Souris and Pembina rivers are relatively low with no significant flooding issues.

Gates at the Portage Diversion will be opened briefly later today to clear the ice from the diversion channel. The Portage Diversion could be operated to reduce downstream ice-jam impacts on the Assiniboine River as flows continue to rise. The risk of lakes flooding remains low in most major Manitoba lakes.

Initial priorities of MECC include: