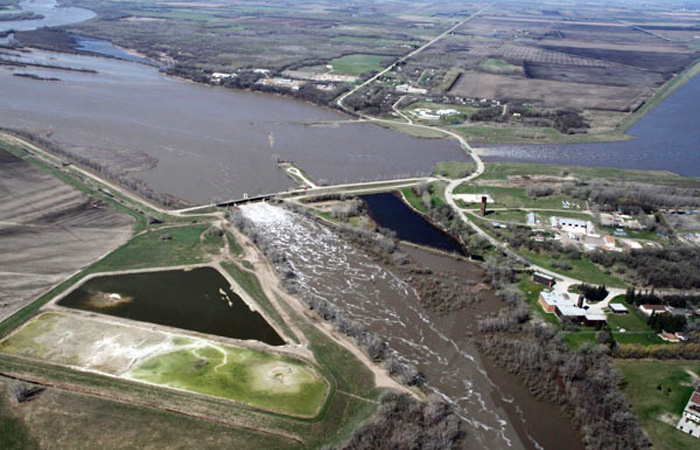 Assiniboine River and Portage Diversion at Southport, May 2011.

Manitoba Transportation and Infrastructure’s Hydrologic Forecast Centre has issued an overland flood warning for southern Manitoba from the Saskatchewan border eastward to Provincial Trunk Highway (PTH) 12 and from the United States border northwards to PTH 1. The warning could extend north of PTH 1 between PTH 5 and PTH 16, and north of PTH 1 between Portage la Prairie and Winnipeg.

These areas could receive more than 50 millimetres (mm) precipitation of a mix of rain and snow, with some localized areas receiving up to 80 mm by midday April 25.

Some ditches and waterways are still ice covered or contain snow limiting water flows. As high amounts of rainfall occurring in a short period may cause overland flooding, citizens are advised of the potential for the sudden rise of water levels in these areas. Overland flooding occurs when water on the ground surface does not have sufficient time to flow into rivers and streams, potentially causing flooding of low-lying areas, roads and properties. In most cases, once the water enters the rivers and streams, they have sufficient capacity to handle the flows.

Weather models do not fully agree on the exact location, amount and timing of the precipitation system. However, confidence is high that most central and southern Manitoba basins, including the United States’ portions of the Red, Souris, Pembina and Roseau river basins, could receive 40 to 50 mm of precipitation with localized areas receiving up to 80 mm by April 25. This system is expected to be accompanied by strong winds gusting up to 70 kilometres per hour.

Daily average temperatures are forecast to remain above zero until early next week for most parts of southern and central Manitoba. These forecast temperatures along with forecast precipitations will create runoff in the coming days and levels will start rising on most southern and central basins. Peak flows on the Red and Assiniboine rivers and tributaries are not expected to arrive until late April to early May.

Flood forecasters will continue to monitor precipitation and collect data about snowfall amounts. The most recent river forecast information can be found at gov.mb.ca.

The Manitoba Emergency Measures Organization continues to work with all local authorities and emergency management partners to provide guidance and support for both preparatory and response activities.

MTI continues to monitor highway conditions and heavy equipment may be deployed in the event of snow accumulation. Motorists are reminded to adjust driving habits for winter road conditions and remain alert when following or approaching oncoming highway snowplows. All equipment has flashing blue warning lights and drivers should stay well back of all equipment. Do not attempt to pass snowplows from behind when they are in operation and remember to slow down when passing approaching snowplows.

Heavy winds and snow accumulation could limit visibility and create challenging driving conditions. Manitobans in the affected areas are advised to travel only when necessary or wait until road conditions are safe to do so. Surfaces such as highways, roads, walkways and parking lots may become icy and slippery.