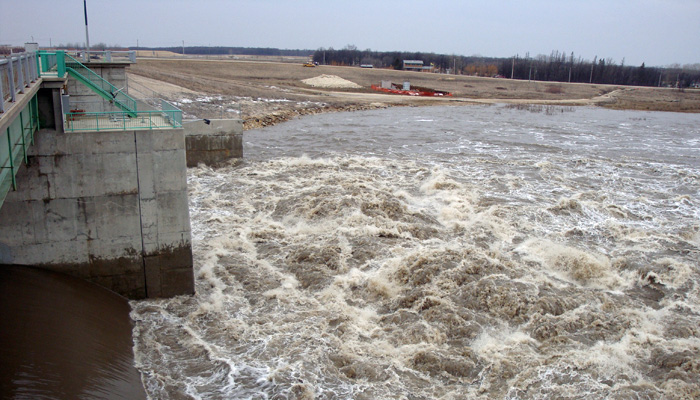 Manitoba Transportation and Infrastructure’s Hydrologic Forecast Centre continues to monitor flood activity as water levels on streams and tributaries in most of Manitoba may continue to be impacted by run-off from recent precipitation. Although water levels on smaller creeks and drains are beginning to stabilize, many larger rivers and streams are continuing to rise as water moves through the system.

Water levels are expected to remain high for an extended duration in many areas in southern and central Manitoba. In the Red River Valley, the province remains at a high state of readiness for water levels similar to 2009 spring flood levels on the Red River between Emerson and the Red River Floodway inlet.

Overland flooding continues in the Interlake, Red River Valley and many other portions of central and southern Manitoba. Residents in these areas are advised to monitor local conditions and to take any necessary flood mitigation actions. Little to no precipitation is expected in southern and central Manitoba for the next four days.

Since April 1, southern and southeastern Manitoba and the United States portion of the Red River basin have received 120 to 160 millimetres (mm) of precipitation, which is between 400 to 600 per cent of normal amounts.

Several communities throughout the province continue to be impacted by high water levels. Reported impacts to date include loss of road access, flooded properties and damage to infrastructure. As a result of these impacts, seven municipal emergency operations centres have been activated and states of local emergency have been declared in the following 18 communities:

Provincial Trunk Highway (PTH) 75 has been closed at the north end of Morris since April 29 with a detour in place to redirect PTH 75 traffic to Provincial Road (PR) 246. PTH 75 on the south side of Morris will also close tonight at 8 p.m. A detour utilizing PTH 3 through Carman and south to Winkler and onto PTH 14 to return to PTH 75 will now be in effect. Additional detour information is available at www.manitoba511.ca or by calling 511.

The Red River Floodway and the Portage Diversion continue to operate to lower water levels in Winnipeg. Flow in the floodway channel was 38,300 cubic feet per second (cfs) this morning. Flows upstream of the floodway inlet this morning are approximately 74,000 cfs. Drains, creeks and tributaries in the Red River Valley and the Interlake are above or at capacity.

Warnings and high water advisories in effect include:

An overland flood warning for the Interlake and portions of southern and central Manitoba as highlighted in the attached map remains in place and has been extended to include all of eastern Manitoba. Most ditches and waterways are either full or near capacity. The recent heavy rain and saturated soils are creating overland flooding in many areas.

The Shellmouth Dam is being operated to reduce the risk of flooding downstream on the Assiniboine River while at the same time providing sufficient storage for water supply. Outflows from the dam will be increased today in compliance with operating guidelines. Flooding of low lands along the Assiniboine River will increase as a result. However, the dam is still providing a significant flood reduction benefit as current outflows from the dam are less than half of inflows to the dam. Operations aim to minimize the risk of flooding later during the growing season.

Provincial crews are deployed to a number of communities in southern Manitoba running pumping operations as well as preparing for, monitoring and implementing dike closures as required. Manitobans are reminded to stay off waterways including creeks, streams, rivers and the floodway. High flows, debris and cold temperatures present a significant safety risk.

Rising waters may necessitate dike or highway closures at some locations and motorists are reminded to stay off closed roads and not attempt to travel across inundated roads. Members of the public are also asked to keep away from flooded areas, water control structures including dams and diversions, and areas where flood response crews are working. Up-to-date information on highway conditions, including detours and road closures, is available at manitoba511.ca or by calling 511.