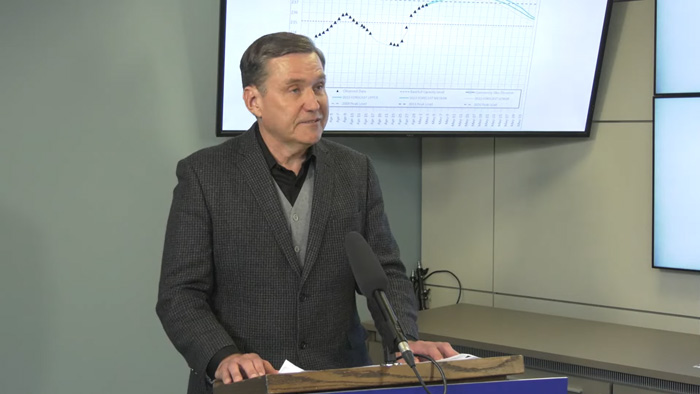 Manitoba Transportation and Infrastructure (MTI) Hydrologic Forecast Centre is monitoring a new precipitation system which is expected to bring 20 to 40 millimetres (mm) of rain to much of southern and central Manitoba over the next few days. Some localized areas could receive higher amounts of precipitation with some weather models calling for as much as 70 mm of rain. In southeast Manitoba, there is a possibility of thunderstorms that could bring a total of more than 100 mm of rain. This is a dynamic weather system and there is still uncertainty about the amounts and location of precipitation.

Depending on the amount, location and intensity of the rainfall, flows and water levels in some areas of the province will be impacted. Forecasters are monitoring the system and will issue updates as required.

The forecast precipitation is also expected to affect the upper Assiniboine River basin in Saskatchewan and increase inflows into the Shellmouth Dam. The department continues to co-ordinate operations with stakeholders and advises further increases of outflow from the dam may be necessary, depending on the amount of rain received.

The forecast precipitation is also expected to affect the Whiteshell lakes area and the Winnipeg River basin upstream in Ontario. Very high flows and water levels are being experienced on the lakes and rivers in this area and the expected precipitation will cause them to rise further. Manitoba Hydro measures water levels and flows on waterways contributing to the provincial hydroelectric system and provides a 14-day forecast at hydro.mb.ca.

Manitoba Transportation and Infrastructure advises that Provincial Trunk Highway (PTH) 75 south of Morris is now open to north and south bound traffic. The detour on PTH 75 north of Morris from PR 205 to PR 246 to PTH 23 will be in effect until water levels recede further. Provincial crews continue to monitor dike and highway closures in the Red River Valley, and as water levels decrease, closures are being removed as soon as highways can be cleaned, inspected and repaired.

Several communities throughout the province continue to be impacted by high water levels. Manitoba Emergency Measures Organization (EMO) continues to work with all local authorities and emergency management partners to provide guidance and support for response and recovery activities. At this time, 38 states of local emergency have been declared. Manitoba EMO continues to work with Indigenous Services Canada (ISC) in supporting ISC-led response measures with First Nation communities.

A complete list of flood warnings, watches and high water advisories is available in the daily flood reports found at gov.mb.ca.

Private well owners are reminded to test their wells to determine if they need to take steps to improve water quality and address potentially harmful bacteria. Testing is recommended at least once a year after the spring run-off or after overland flooding.