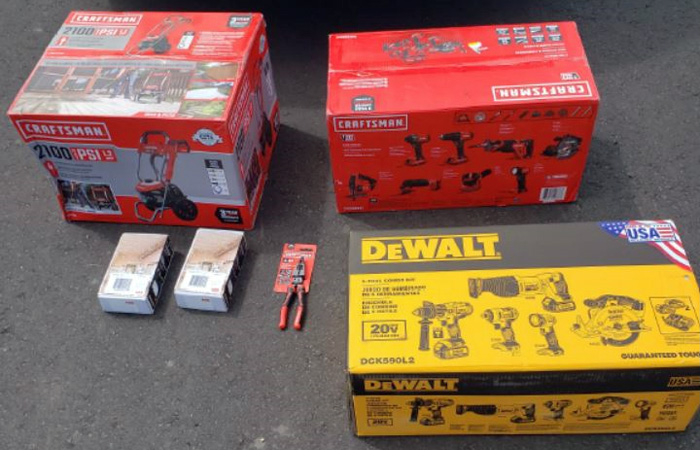 Items stolen from a business located in the 2400 block of Saskatchewan Avenue, in Portage la Prairie.

Portage la Prairie RCMP are reporting that two Winnipeg men have been arrested and are facing numerous charges in connection to a recent theft that occurred at a local business.

Officers were advised that two males entered the establishment and had filled up a shopping cart with items and ran out of the store without paying. A male employee confronted the suspects in the parking lot and was physically assaulted as he tried to prevent them from loading up the stolen items. The suspects quickly fled the scene in a pickup truck which was discovered to be stolen out of Winnipeg.

Police say that patrols were made in the area and the suspect vehicle was located parked in a nearby parking lot with the stolen property still inside.

Officers continued to patrol the area for the two suspects who were eventually observed running out of the store where they attempted to flee on foot. A short foot pursuit ensued and subsequently they were arrested without incident. A search of one of the suspects resulted in the seizure of a canister of bear mace and a small amount of a drug believed to be cocaine.

RCMP report that 30-year-old Anthony Prince and 21-year-old Robert Oigg, both from Winnipeg, are facing numerous theft and firearms related charges in connection to this incident.