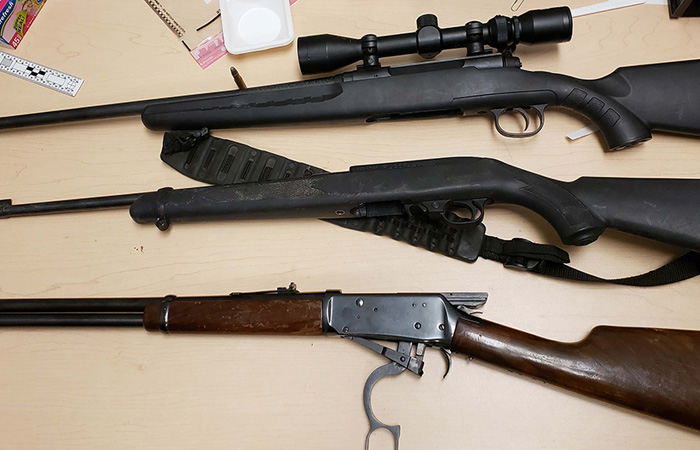 Firearms seized at a rural property located in the Rural Municipality of Whitehead, Manitoba.

Brandon RCMP are reporting that three individuals have recently been arrested and charged in connection to a number of break and enters, as well as an arson, that occurred in the Rural Municipality of Whitehead, Manitoba.

On June 25, 2022, Brandon RCMP received two reports of break and enters, along with a house fire, at rural properties located in the RM of Whitehead.

Officers responded to all the incidents, and the ensuing investigation determined that several suspects were breaking into rural properties and stealing firearms. At one location, the home was set on fire. Police noted that nobody was home at the time of the fire and there were no injuries reported.

Witnesses had reported seeing the suspects fleeing in a stolen vehicle. Subsequently, Brandon Police Service located the vehicle at a residence within the city, recovered the stolen firearms and took two male and one female suspect into custody. RCMP then attended Brandon Police Service cells and arrested the three for the break and enters, thefts and arson.

RCMP report that Natasha Elk and Addison Laroque, both 23 years of age and from Brandon, along with 20-year-old Silas Audy from Selkirk, are facing numerous charges in relation to this incident.