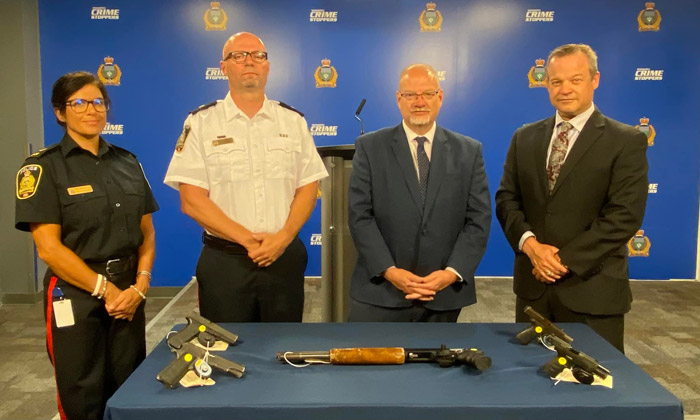 Steinbach MLA and Justice Minister Kelvin Goertzen, announced that the Manitoba government is providing more than $17,000 through the Criminal Property Forfeiture Fund (CPF) to the Winnipeg Police Service to purchase equipment and, undergo training that will allow investigators working with seized firearms to better track and restore their serial numbers.

“The ability to restore serial numbers from seized firearms will provide valuable, timely information to officers investigating firearm-related crimes including shootings and firearm trafficking,” said Goertzen. “This funding will help investigators trace the origin of firearms, identify suspects and determine how criminals are illegally acquiring firearms. This important work will lead to the removal of firearms from the streets of Winnipeg, and to the arrest and prosecution of perpetrators, which will make our city safer.”

“Any firearm with its serial number obliterated is a crime gun and is a trademark of a smuggled or trafficked firearm that is used for a criminal purpose,” said Insp. Elton Hall, officer-in-charge of the Organized Crime Division, Winnipeg Police Service. “Removing the serial number is done in order to prevent tracing of the firearm, and allows smuggling and trafficking groups to remain active.”

Serial number restoration is a long-term program with the Winnipeg Police Service. The Firearms Investigative Analysis Section (FIAS) started as a pilot project in 2010 and began as an official unit within the Winnipeg Police Service in 2011. CPF funding will allow WPS to grow the program and continue to work with agencies like Firearms Tracing Enforcement (FATE), Canada Border Services Agency, ATF and National Weapons Enforcement Support Team to combat organized crime groups, which traffic illegal firearms.

In 2021, FIAS recovered 859seized crime guns, surpassing 2020, in which 721 crime guns were seized. Of these 859 firearms seized in 2021, FIAS was able to complete serial number restoration work on approximately 89 firearms.

The demand for and the use of illegal firearms by individuals and organized crime groups continues to increase in Winnipeg, the minister said, adding without a restoration attempt, crime-gun sources will remain anonymous.

Since its inception in 2009, the Criminal Property Forfeiture Fund has distributed more than $20 million back to communities throughout the province. The program seizes and liquidates criminal assets, and redirects funding to projects and initiatives designed to protect Manitobans and enhance public safety. The funds are provided to organizations across Manitoba whose important initiatives continue to build community, invest in youth and support victims of crime, noted the minister.