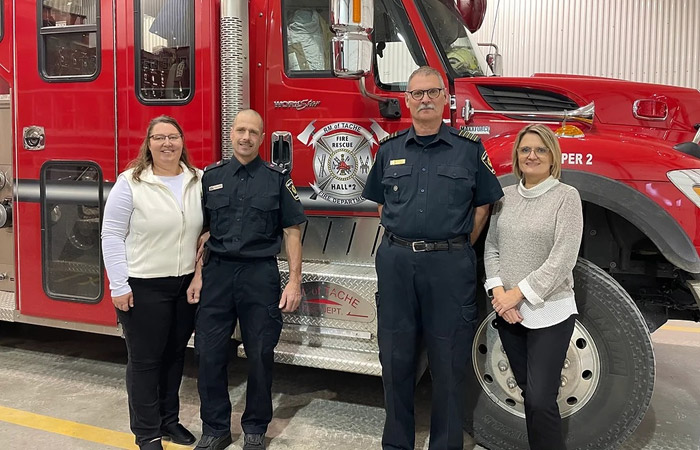 Landmark Fire Station to be home of the first Hope's Cradle safe surrender site in Manitoba.

The RM of Taché Fire Department’s Landmark Hall is set to become the first Hope’s Cradle safe surrender site in Manitoba, the second in Canada. The first was installed at the Strathmore Fire Station in Alberta last year.

A Hope’s Cradle is an anonymous and safe place where an infant can be safely surrendered. Inside is a temperature-controlled bassinet and documentation that informs the parent, usually the mother, of her rights, how the process works, a form to send in about medical history, and a list of resources. Once the door is opened, the parent has two minutes to place the baby in the cradle and vacate the site before a silent alarm is sent to first responders.

Making this project a reality has been a collaborative effort, explains RM of Taché Fire Chief Allan Rau. “Earlier this year, I was approached by Trevor Braun, a member of Taché Fire and was asked if we could place a Hope’s Cradle in the Landmark Fire Station. I researched the subject and was immediately in favour of the idea. The proposal was presented to Council and approved. Couldn’t be prouder of the RM of Taché.”

Trevor and Sheila Braun have been passionate about a safe surrender site in Manitoba for some time. “Trevor and I saw a documentary years ago called “The Drop Box”, which features the story of a South Korean pastor who found an abandoned infant on his church steps and built a heated hatch to rescue others,” said Sheila. “We were deeply impacted, so when we read that Life Culture was looking for a location to place a Hope’s Cradle, we immediately wanted to get involved.”

The $20,000 needed to install the cradle will be raised through Life Culture Canada. “Hope’s Cradle is meant as a last resort for parents that feel they have no other option,” said Executive Director, Susan Penner. “Any parent who feels the need to utilize this initiative is in a desperate situation.”

Earlier this spring, a newborn baby girl was found in a dumpster in Winnipeg. Penner says that this tragic situation brought to light that an anonymous, safe surrender site was needed in Manitoba. “The fact is, we only know about the abandoned babies that are found,” noted Penner. “There are others that are abandoned that we don’t even know about.”

As for placing the Hope’s Cradle in Landmark, research from Hope’s Cradle indicates that parents are more comfortable surrendering their infant in a rural location due to the perception of anonymity.

“Landmark is a great central location. It is 30 minutes from Winnipeg and Steinbach, with many communities in between,” said Penner. “Although located in Landmark, this is really a regional project. I am hoping that individuals, businesses, and churches in the region will get on board with supporting this initiative.”

Hope’s Cradle is an initiative of Gems for Gems, a Calgary based organization working to end domestic abuse and help survivors.