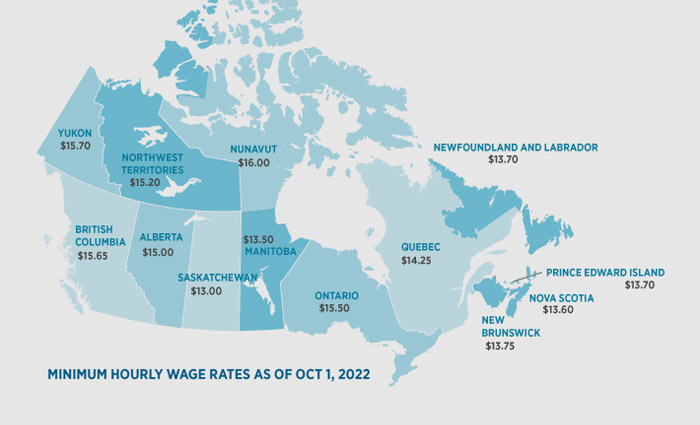 The Manitoba government has introduced the Minimum Wage Adjustment Act, which would raise the minimum hourly wage to $14.15 on April 1, 2023, as the second phase of a plan to further increase the minimum wage to $15 on Oct. 1, 2023.

“Extraordinarily high inflation in recent months has made it increasingly difficult for Manitoba families to make ends meet,” said Labour, Consumer Protection and Government Services Minister Reg Helwer. “This phased-in approach to raising the minimum wage would help relieve some of the economic pressures on Manitoba workers while lessening the impact on small businesses’ bottom lines as much as possible.”

This past summer, because of unusual economic circumstances during the COVID-19 pandemic, the Manitoba government passed amendments to the Employment Standards Code to allow minimum wage increases above the rate of inflation when inflation as measured by the Consumer Price Index (CPI) exceeds five per cent in the first quarter of a calendar year.

The provincial hourly minimum wage was raised on Oct. 1 to $13.50 from $11.95 after government consultations with labour groups and businesses. Through this new bill, the Manitoba government plans a further increase to the minimum wage of 65 cents on April 1, 2023, to raise it to $14.15, Helwer noted.

In August, the Manitoba government committed to raising the minimum wage to approximately $15 by Oct. 1, 2023. This is expected due to another regularly anticipated increase based on the CPI.

“This increase to the minimum wage would assist lower-income Manitobans in dealing with the current economic realities as appropriate and necessary,” said Helwer. “We will continue to tie the wage to economic indicators, and in this way maintain purchasing power, stability and predictability for employers.”

The latest minimum wage changes follow recommendations made by the provincial Labour Management Review Committee this past summer, Helwer noted.