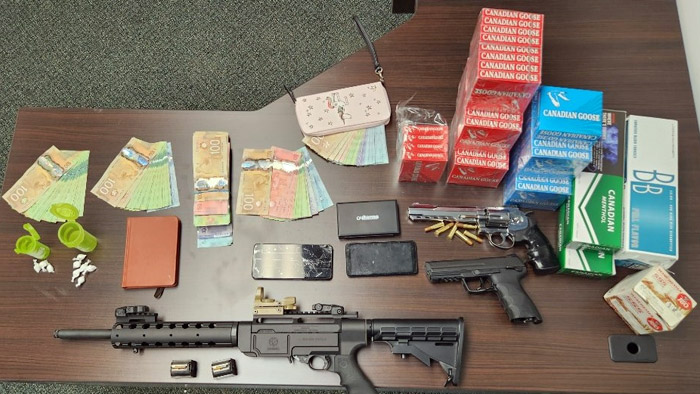 Items seized by Manitoba RCMP as part of an ongoing investigation.

Manitoba RCMP are reporting that a quantity of drugs, cash, firearms and illegal tobacco has been seized from a residence located in Hamiota, resulting from a joint police investigation.

On November 18, 2022, as part of an ongoing investigation, Manitoba West District Crime Reduction Enforcement Support Team (CREST), along with Yellowhead RCMP, executed a search warrant at a residence located in Hamiota, Manitoba.

As a result of the search, officers seized a large amount of cash, pre-packaged cocaine, firearms and several cartons of unstamped tobacco products.

RCMP report that a 52-year-old male suspect was arrested at the residence and is facing charges of possession for the purpose of trafficking, possession of property obtained by crime, unauthorized possession of a firearm, unsafe storage of a firearm, driving while prohibited and other provincial charges for tobacco.

Police say that the suspect has been released from custody with an upcoming court date.