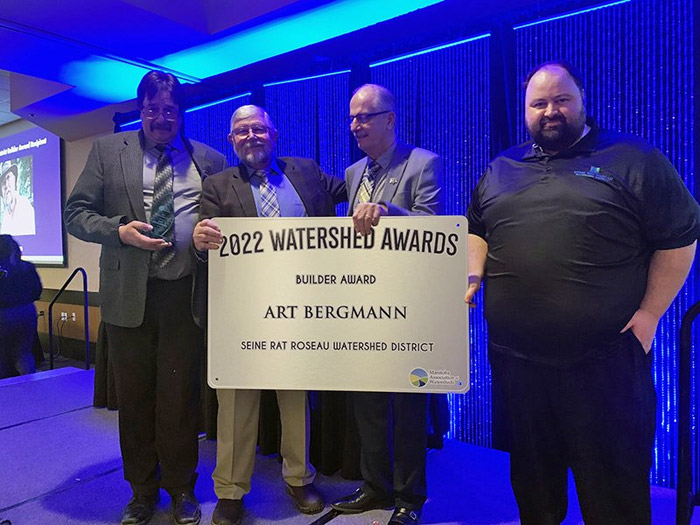 The Manitoba Association of Watersheds has announced that Art Bergmann has received the 2022 Watershed District Builder Award. The announcement was made at the annual Manitoba Watersheds Conference in Winnipeg.

In 2004, only 2 years after the inauguration of the Seine-Rat River Conservation District (SRRCD), (now Seine Rat Roseau Watershed District (SRRWD)), Art Bergmann was elected to the Board of Directors. He continued his tenure until October of 2019. Art was also a councillor in the RM of Ste. Anne, and from the very beginning, was instrumental in garnering municipal support for the district.

At the time, the SRRCD consisted of a single municipality – the RM of La Broquerie. When the district requested that their neighbouring RM, the RM of Ste. Anne, join the Seine-Rat River Conservation District, Art went to work. He informed his council that they could choose to passively receive the surface water sent their way by upstream municipalities or they could choose to be an active part of the decision-making process across the entire watershed, working towards the betterment of all municipalities both upstream and downstream.

On the back of such strong leadership, the council for the RM of Ste. Anne joined the SRRWD, instigating a swell of interested amongst local municipalities who were now lining up to join the district.

Art led the charge to ensure new municipalities were brought on in an efficient manner, allowing them to become active participants in the district without slowing down the forward momentum the district had built. The SRRWD has now integrated 16 municipal partners who successfully implement a watershed perspective in their decision making.

Art excelled at listening to all partners and understanding the challenges unique to each area of the watershed. The Seine River Integrated Watershed Management Plan was important to Art, helping to identify and prioritize the direction of the district and serving as a common document that the whole district could buy into. This document remains a guiding force throughout the district.

One of the highlights of Art’s time on the SRRWD Board was The Forestry Road 13 Water Retention project. At the time, the Province of Manitoba had intended to decommission Fire Road 13 however, the district saw the value in using the road for water retention. The flow of water coming out of the Sandilands Provincial Forest could be slowed, and areas downstream including the Trans-Canada Highway near Ritcher could be protected from overland flooding, by maintaining the former forestry road as a berm with controlled breaches. The project required a lot of collaboration between SRRWD, municipal partners, the Province of Manitoba as well as the neighboring Conservation District to the North (Cooks Creek (now Northeast Red Watershed District)).

Art was responsible for promoting the project and successfully garnering the cooperation of 5 municipalities, a neighboring watershed district, as well as the Province of Manitoba. Forest Road 13 Water Retention remains one of the most impactful projects in the history of the Seine Rat Roseau Watershed District.

Art’s ability to connect with people and communicate to a wide variety of partners was always evident around the board room table. His ability to assess a project and consider its potential effects both locally and watershed-wide made him a true champion of the watershed perspective. This led to developing long-lasting relationships that furthered the success of the watershed district. The strides that the watershed district has made from its humble beginnings to the modern organization we have now is feather in Art’s cap and would not have been possible without his dedication and commitment to watershed management.