Roundabout to be constructed south of Oak Bluff 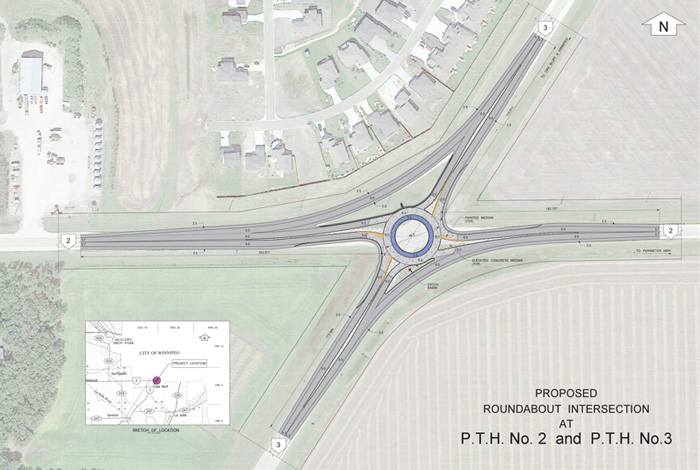 The construction of a roundabout at the intersection of PTH 2 and PTH 3 south of Oak Bluff and a consultation on interim safety improvements for the south Perimeter Highway will ensure Manitobans are better protected on major highways in the province.

“There have been a number of concerns related to this intersection,” said Infrastructure Minister Ron Schuler. “The volume of traffic has created long lines as well as unsafe merging and crossings. This roundabout is the product of a thorough design process, taking into account speed, driver comfort, future growth and oversized loads.”

The minister noted this will be the first roundabout on the provincial highway network and will help manage the traffic of approximately 10,000 vehicles every day. Research shows roundabouts reduce fatal collisions by nearly 90 per cent and injuries by as much as 76 per cent, while being less expensive to maintain as compared to traffic signals. The project will go to tender this spring and is expected to be complete later this year.

The minister also announced upcoming consultations to improve safety on the south Perimeter Highway. An increasing volume of vehicles directly accessing the highway at more locations results in safety and operational problems. There are currently multiple uncontrolled access points and median openings along the south Perimeter Highway where traffic volumes are more than 30,000 vehicles per day.

“The Perimeter Highway is one of the most important economic corridors in Manitoba and is a major route for many people every day,” said Schuler. “There is a need for significant interim safety measures while we develop a plan to ensure the safety of all who use the road in the longer term.”

There have been numerous collisions at controlled intersections with stop signs and many intersections do not have adequate space to accommodate turning vehicles, which causes safety issues.

Manitoba Infrastructure will consult with stakeholders, including municipalities, residents and other users to review plans for improving safety on the Perimeter Highway at uncontrolled intersections from Portage Avenue on the west to Fermor Avenue on the east, as well as other safety concerns along this section of highway.