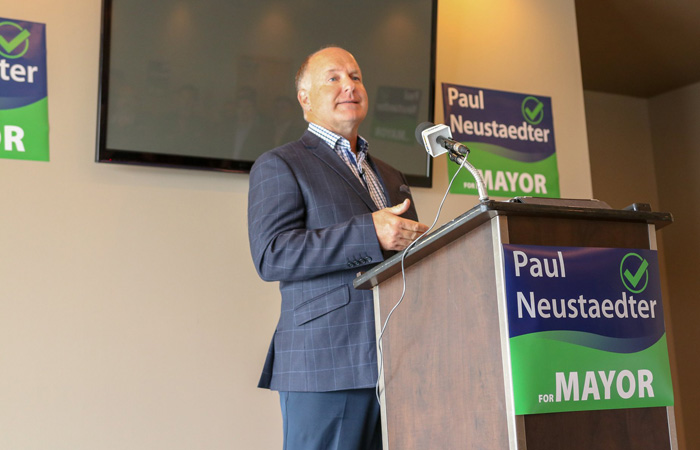 The list of candidates for Steinbach’s Mayoral race grows to three as Paul Neustaedter announces that he is now running. In preparation for the October 24th, a media conference was held which was well attended by many friends, new comers to the community, business people, seniors and youth.

Neustaedter says a multiplex can only be built with significant private funding from businesses or citizens. Then, if elected, he promises to work with the provincial and federal governments to obtain grants in order to make this project more affordable.

“If elected, a plan for a multiplex will be ready in eight months from the election day and the project would only move forward if it’s affordable and if all governments are on board,” Neustaedter stated. In regard to the multiplex, Neustaedter mentions doing nothing is not an option while doing the wrong thing harms businesses and its residents and their families.

Neustaedter announced additional priorities Wednesday, including the need to keep taxes affordable. Other priorities include public safety, attracting quality manufacturing jobs, keeping youth interested in Steinbach, listening to the community and ensuring the City’s infrastructure is ready for years to come.