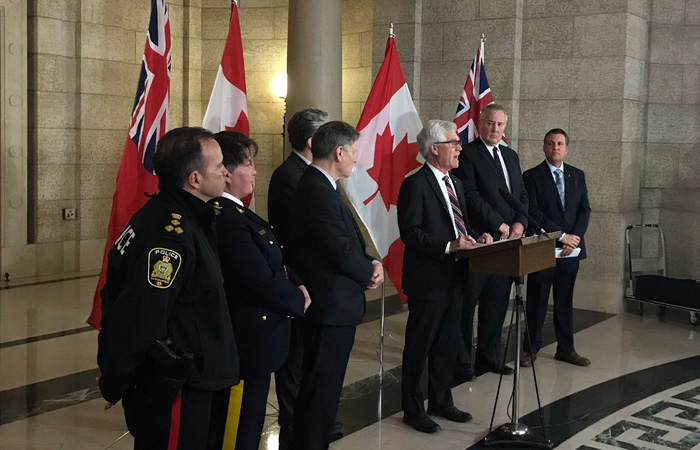 Announcement of $13 million for Manitoba's Guns and Gangs Suppression Strategy.

The provincial government recently announced details of Manitoba’s Guns and Gangs Suppression Strategy, made possible by more than $2.3 million in funding over two years from the Government of Canada through its Initiative to Take Action against Gun and Gang Violence.

“Our government is committed to protecting Manitoba families by cracking down on gun and gang crime in our communities,” said Justice Minister Cliff Cullen. “We’re happy to have the federal government’s support for our gang suppression strategy, which will help keep Manitobans safe in their homes and neighbourhoods.”

The minister noted the funding announced today will enable Manitoba to equip police agencies and Manitoba Justice with the tools, equipment and capacity they need to disrupt and suppress gun and gang activity in Manitoba including:

“Sadly, too many youth in vulnerable communities are often lured into joining gangs, and our government is working with the Province of Manitoba to support prevention, gang exit and enforcement, while taking into account regional issues,” Minister of Border Security and Organized Crime Reduction Bill Blair said. “By supporting local programs and providing law enforcement with the necessary resources and training, we will build stronger communities, reduce gun and gang violence, and better protect Canadians.”

“Organized crime and the illicit drug trade destroys families, hurts communities and is largely responsible for the spread of meth in Winnipeg, Brandon and communities across Manitoba,” said Cullen. “Manitoba’s Guns and Gangs Suppression Strategy enables us to combat gangs and the illicit drug trade using a collaborative and co-ordinated response that engages all levels of government and law enforcement agencies in Manitoba.”

In 2018, the Winnipeg Police Service’s Street Crime Unit alone arrested 411 people, seized more than $2.4 million worth of illicit drugs, more than $1 million in cash and 144 weapons including knives, firearms and explosives. Of the 411 people arrested, 161 of them were known gang members or associates. Year-to-date statistics for 2019 show Winnipeg is on par for similar results.