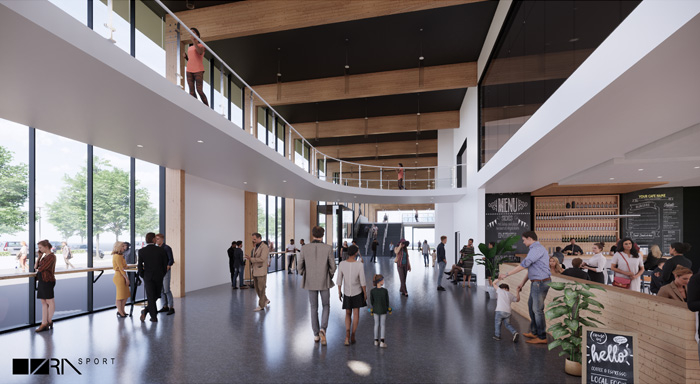 Conceptual Design by VRA Sport - a division of Verne Reimer Architecture - in collaboration with Populous.

Community group Southeast Event Centre Inc. (SEC) is pleased to announce a partnership with the City of Steinbach to develop and construct a cultural and recreational facility in downtown Steinbach to serve all of Southeastern Manitoba.

SEC is a not-for-profit membership group comprised of local business owners and community members who have donated time and funding to realize a common dream; to construct an Event Centre that will create exciting new recreational and cultural opportunities for the region. The goal is to create innovative new programs, partnerships, and synergies throughout Steinbach and the Southeastern region, benefiting culture and recreation. The vision is for this facility to serve as a central hub of the region’s cultural and recreational endeavors.

“We are excited to move this project forward and create an inclusive facility for many different user groups,” said Grant Lazaruk, SEC Chair. “In collaboration with community members, we want to position the region as an attractive host for concerts, conferences, trade shows, ice sports, and events that benefit culture and recreation. This facility will bring the community together in new and unique ways, and we’re proud to be a part of it.”

In June, non-profit SEC presented concept plans for an all-in-one events facility to Council who reviewed the information and ultimately decided to move forward with the project with both City funds and land.

“Tonight’s resolution to commit $10M of City funds confirms our support of the project,” said Mayor Earl Funk. “This opportunity has come at the right time for our city and aligns with Councils’ community vision. This is a multi-use venue that supports recreation, arts, economy, and culture under one roof in a way that provides excellent value to our citizens.”

In addition to $10M in funds, City Council has approved the use of city land in and around the T. G. Smith Centre, as well as a $17.5M grant application to other levels of government under the Investing in Canada and Infrastructure Program (ICIP). SEC has pledged to raise at least $15M in private funding, bringing the total project cost to an estimated $42.5M. Support from the provincial and federal government is required for the project to go ahead.

The proposed facility includes a main venue that can be used for concerts, events, ice sports, tradeshows, and ceremonies with 2,500 spectator seats as well as a 500 seat multi-use hall/gymnasium and atrium.

“We are excited to work with SEC to help make this a reality for our city,” stated Mayor Funk. “It supports one of Council’s main priorities to renew recreation and cultural facilities. It will be a community space, for all community groups, made through community partnerships.”

Terms of the partnership will have SEC Inc. managing the facility’s daily operations while the City retains ownership of the facility and land.

Since inception in 2017, SEC’s Mission has been: “To create and establish a community-led approach to culture and recreation in the Steinbach and Southeastern Manitoba region.” The SEC group has met with various political entities, with discussions focusing on how best to accomplish the common goal in an affordable way that accommodates various community user groups that will benefit from the events centre.

The SEC group’s goal has been to balance community needs with government requirements, and to devise what will best serve the community in the most affordable way possible.

It is hoped that a response to the grant application for provincial and federal support will be received in the near future. If approved, the construction of the Events Centre is expected to take several years to complete. The public will be kept informed at all stages of the project.

Print Studio One in Steinbach offers professional print and signage services which include graphic design, logos, brochures and more.