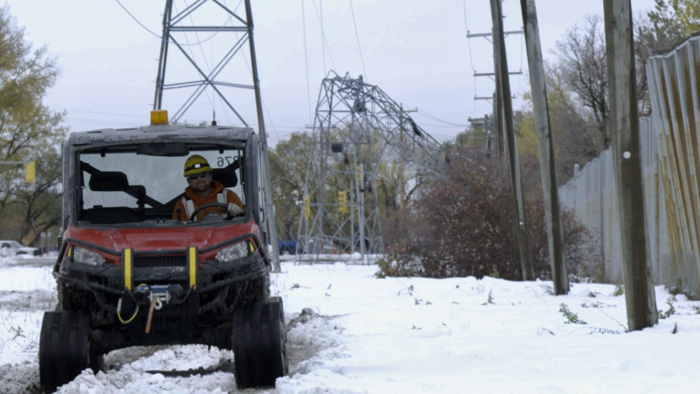 Manitoba Infrastructure’s Hydrologic Forecast Centre reports the impacts of the mid-October severe weather event are diminishing, but flood warnings and high water advisories remain in place for some areas of the province.

Manitoba Hydro reports about 1,300 customers remain without power due to the Thanksgiving weekend storm. At last count, 2,826 damaged poles have been replaced. Power remains out for Dauphin River First Nation and Little Saskatchewan First Nation. The communities of Homebrook and Dauphin River remain without power. Power outages remain in the RMs of Grahamdale, Portage la Prairie and West Interlake.

Manitoba Hydro is also asking the public to help gather valuable information, such as photos and video, on the recent storm before they delete it from their phones. Images of ice and snow accumulation leading up to and during outages to help quantify the magnitude of the event. Manitoba Hydro can use the information to assess the system’s resiliency and for future planning.

Lowering of the floodway gates is contributing to slowly rising water at St. Adolphe. It will take a few weeks before the floodway gates are fully lowered. The water level at James Avenue in Winnipeg is currently at 16.8 feet. The forecast peak for James Ave. is 17 to 17.3 ft. between Oct. 23 and 24. Capacity is 18 ft.

The Souris River and the Assiniboine River have peaked at most locations. Flows on these rivers will be higher than normal for this time of year but are expected to remain well within capacity.

Water levels on lakes in the Whiteshell area have stabilized at or near record highs for this time of year. Water levels are expected to slowly decline if no significant precipitation occurs.

High water advisories are in place for the following areas:

Flood warnings are in place for the following areas: