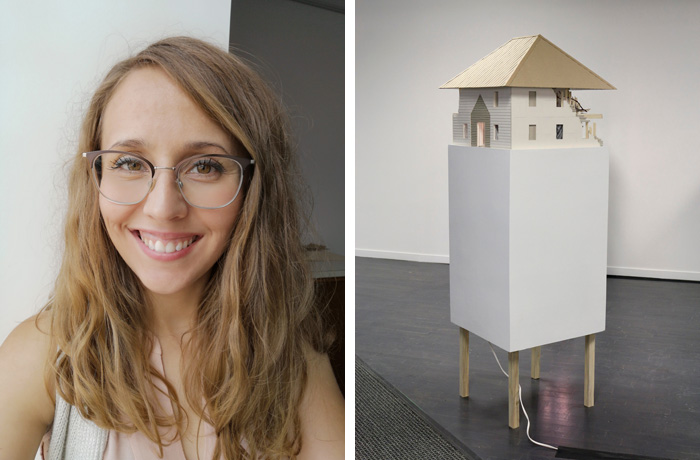 St. Pierre artist Erika Dueck with her sculpture - The Sanctuary.

Erika Dueck was one of fifty-two finalists from across Canada participating in the SSNAP exhibition and eligible to win one of ten prizes totaling $39,000. Her piece titled, The Sanctuary, is a 64″ x 20″ x 20″ sculpture made mostly from paper products. SSNAP is a biennial national art competition, established in 2015, that recognizes works that have significant impact, depth of meaning, work that pushes boundaries and creates a conversation, bringing context to cultural issues both local and global.

35-year-old Dueck is a sessional instructor at the University of Manitoba’s School of Art. “I’ve been teaching for the past three years and juggling making art at the same time. This particular work took me two to three months to complete.” She adds, “Making miniatures takes a long time, and my work is very precise, it’s also a way to imagine the future. Through this mixed media piece I’m questioning where humanity is headed in terms of our relationships with one another and our environment. The space doesn’t provide any answers, so it’s up to the viewer to explore the spaces and come up with their own interpretations which will hopefully lead to further conversations.”

For Dueck, winning the People’s Choice Award provides an opportunity to share her work on the national stage, “During the SSNAP Exhibition I enjoyed seeing works from artists across Canada, meeting them and seeing their works in person.” The Sanctuary was made from scraps of cardboard, pressboard, mirror, the branch of a tree, leaves, and scotch brite sponge that was ripped, painted and re-assembled.

SSNAP founding director, Ronald T. Crawford says the third biennial SSNAP exhibition exceeded expectations. “The whole showcase was very exciting and provided a diverse representation of art from coast to coast. It’s important to emphasize the importance of SSNAP as a national art award and its relevance to Canadian art. It’s a rare opportunity to witness works by emerging and established artists’ come together in one visual space.”

Crawford says the response has been incredible, “With 52 Canadian artists in the showcase, it’s thrilling for them to see their work exhibited in context with the other pieces from across Canada; it’s a very personal, moving and welcoming experience.”

The jurors included: David Balzer, Editor-in-chief and co-publisher of Canadian Art from 2016 to 2019, Sandra Meigs, Professor Emeritus at the University of Victoria and a winner of the Governor General’s Award in Visual and Media Arts, and cheyanne turions, Curator at SFU Galleries in Vancouver and a member of the Board of Directors at 221A.