Additional road safety measures to be implemented north of Oakbank 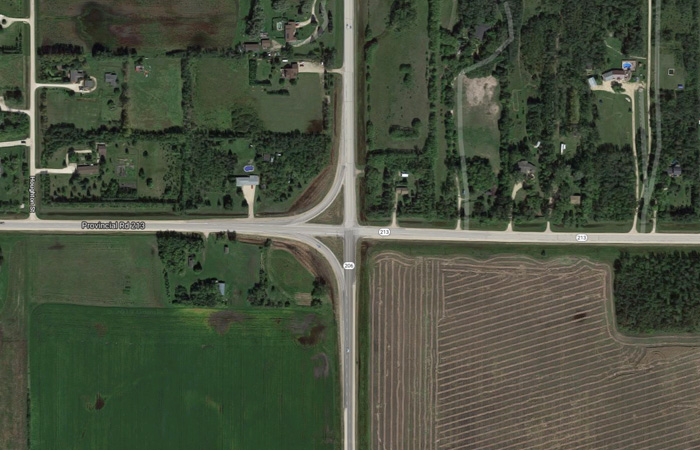 The Manitoba government is taking additional measures to improve safety at the intersection of Provincial Road (PR) 206 and PR 213.

“This has become a problem intersection in the province and the safety measures currently in place are not making enough impact,” said Infrastructure Minister Ron Schuler. “As roads in the community become increasingly busy, we want to make drivers aware that they are entering an important intersection. We urge drivers to slow down and be patient to ensure the safety of everyone on the road.”

In June, Schuler announced interim improvements at the intersection of PR 206 and 213 (Garven Road) north of the town of Oakbank. Over the summer, the province installed rumble strips on Garven Road approaching the intersection, as well as flags on the stop-ahead signs and flashing red lights on the stop signs.

The minister recently announced the speed limit from north of Oakbank to 300 metres before Garven Road will be reduced to 90 km/h from 100 km/h. The limit will be further reduced to 70 km/h for 300 metres on either side of the intersection.

“In 2019, there has been a fatal collision and two other very serious collisions causing significant injuries at the intersection of Garven Road and PR 206,” said Assistant Commissioner Jane MacLatchy, commanding officer, Manitoba RCMP. “These are often preventable tragedies and we all need to work together to stop further devastation and heartache. We remind all motorists that by reducing speeds, paying attention to the road, obeying traffic signs and signals, and by driving to conditions, we keep ourselves and everyone around us safer.”

The recent collisions at the intersection prompted community members to bring their concerns to the province.

“The intersection of 206 and Garvin Road has changed my life forever and has recently taken the life of a young man,” said Dan Wischnewski, who was seriously injured in a collision at the intersection in May. “There has been an incredible amount of heartache which has compelled our community to unite to inspire change. All of us have come together to do everything we can to prevent this from happening again. Solutions are being offered and action is being taken which will provide safer roads for all of our families.”

The minister noted these are interim measures as the province studies long-term solutions for the intersection, which could include traffic signals or a roundabout.

A permanent speed limit reduction requires a regulation change, which has been drafted and is making its way through the regulatory approval process.