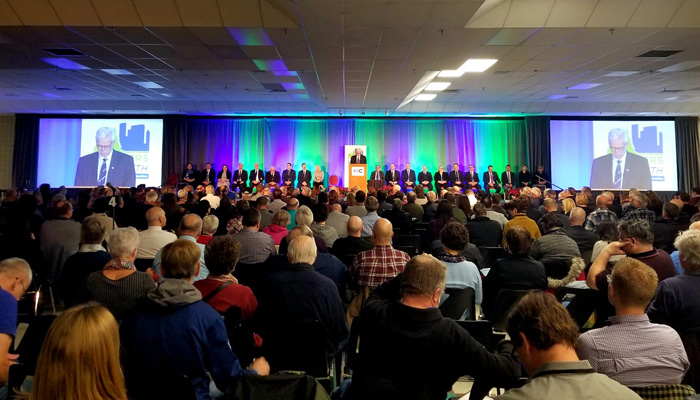 The provincial government will provide more than $400 million for emergency response and damage prevention measures to better protect Manitobans, Premier Brian Pallister announced in his address to the Association of Manitoba Municipalities (AMM) annual convention.

“Our greatest duty as a government is to keep Manitobans safe. It is a duty we all share and a duty we take very seriously,” said Pallister. “Our government is proud to invest in a new, state-of-the-art public safety communications system to replace the province’s outdated system that was left in disrepair by the previous government. The new system will give our police officers, firefighters, paramedics, conservation officers and forest-fire crews a superior communication tool that will enable them to work more effectively, make their jobs safer and ultimately save lives.”

The cost of the new $380-million, multi-year communications system will not be borne by municipalities, alleviating the financial burden on local governments, Pallister noted, adding the new public safety communications service will cost close to $20 million a year when it comes online in 2021.

The province previously announced a new digital two-way mobile radio system, which will provide better coverage over a more secure network. It is expected to be fully implemented by 2021 to replace the outdated FleetNet, used by municipalities, fire, ambulance and police services, as well as the very high frequency (VHF) radio system used by conservation officers and forest-firefighting crews.

“The AMM commends the provincial government for committing to fully fund the annual operating costs of the province’s new public safety communications service,” said Ralph Groening, president, AMM. “Reliable communications technology is vital for saving lives, keeping first responders safe and protecting local communities in times of an emergency. This commitment allows municipalities to focus on these priorities through reduced red tape and a more efficient use of taxpayer dollars for the benefit of all.”

The premier also announced a one-time capital investment of up to $45 million for damage prevention and climate resiliency measures, allocated in three equal portions:

The $45 million will be redistributed from next year’s budget, previously earmarked for the Lake Manitoba Outlet Channel.

“Our government is committed to working with all levels of government to complete the Lake Manitoba Outlet Channel, a vital project for our First Nations communities and rural Manitobans,” said Pallister. “Unfortunately a lack of progress has delayed the project. In the meantime, our government will use those funds for critical, local measures.”

The province also committed to investing and additional $3 million this year for spring flood preparedness, to be spent according to the priorities of the AMM and the Winnipeg Metro Region. A panel of representatives from the AMM, Winnipeg Metro Region and the province, including the Climate and Green office, will decide where that money should be spent.