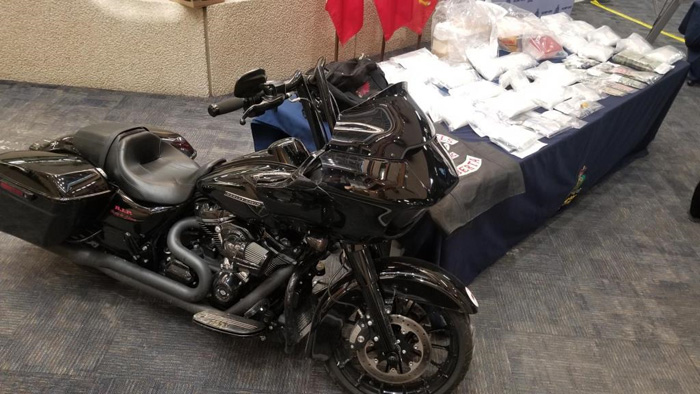 Manitoba RCMP are reporting that Project Declass, a drug trafficking investigation, has resulted in the largest amount of meth seized in an organized crime investigation in Manitoba history.

Project Declass was a 16-month investigation into a drug trafficking network operating out of Winnipeg. The investigation began in August 2018 with the arrest of two Winnipeg residents who were attempting to import 40 kilograms of cocaine into Manitoba.

Working with the US Drug Enforcement Administration and the Canada Border Services Agency; the RCMP launched a full scale investigation into the failed importation attempt.

Project Declass uncovered an integrated network of individuals belonging to different organized crime groups that were working together in an opportunistic fashion to import and distribute illicit drugs in Winnipeg and throughout Manitoba.

At 6am, on December 4, 2019, nine coordinated search warrants were executed. Seven in Winnipeg, one in St. Laurent, Manitoba, and one in Calgary, Alberta.

During these search warrants, nine people were arrested and safely taken into custody. Two more people were arrested on December 5, bringing the total number of individuals arrested to 11. In total, 66 charges have been laid to date against these 11 individuals. Charges include but are not limited to trafficking of meth and cocaine, conspiracy to traffic fentanyl, possession of proceeds of crime and money laundering.

In addition, five vehicles were seized, including a 2018 Harley Davidson motorcycle. Financial seizures to date have totaled over $100,000.

This investigation is still ongoing and restraining orders have been placed on additional bank accounts.