Provencher MP Ted Falk thanks Andrew Scheer for his leadership 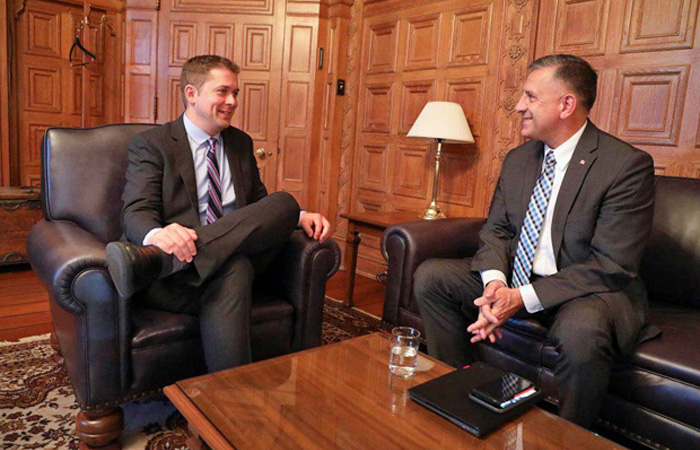 Andrew Scheer with Ted Falk, Member of Parliament for Provencher.

Member of Parliament for Provencher, Ted Falk, thanked Andrew Scheer for his leadership after Scheer announced on Thursday that he is stepping down as Conservative Party leader.

“In a speech before the House of Commons, Mr. Scheer told parliamentarians resigning as leader was ‘one of the most difficult decisions’ he has ever made,” said Falk. “He praised the sacrifices of his wife, Jill, and their family, particularly throughout the busy election campaign, and said he felt that it was time to put his family first.”

Falk also noted that Mr. Scheer called on Conservatives to ‘stay united’ and to ‘stay focused on our one shared goal and our one shared priority: to deliver a strong Conservative government who can unite our country and make life better for all Canadians.’

Following Mr. Scheer’s statement, MP Falk thanked Mr. Scheer for his dedicated leadership to the Conservative Party. “Under Andrew Scheer, the Conservatives picked up seats across the country and won the popular vote,” Falk said. “I want to thank Andrew for his service, as well as Jill and the kids for sharing their husband and father with Canadians.”

With Mr. Scheer’s resignation, the Conservative Party will immediately begin the process of organizing a leadership election. Mr. Scheer intends to remain on as leader until a new leader is chosen.

“Conservatives will have an important decision to make in the months ahead,” Falk added. “I look forward to seeing what the future brings.”