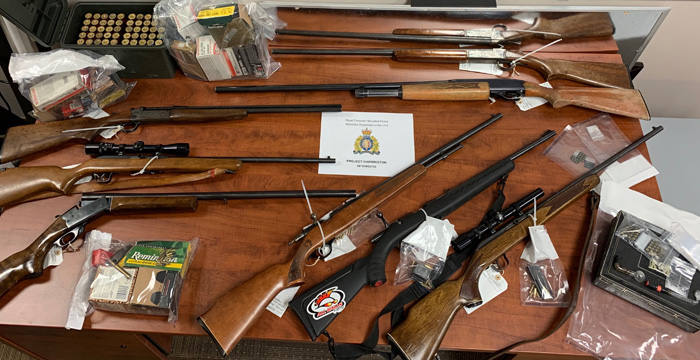 The Manitoba Organized Crime Unit (MOCU) has been investigating the trafficking of methamphetamine that extended across eastern Manitoba and into the City of Winnipeg. As a result, a quantity of drugs and firearms were seized during multiple searches.

MOCU is a newly branded unit within the Manitoba RCMP that targets, disrupts, and dismantles criminal organizations and street gangs. It is also focused on disrupting the trafficking of weapons and high risk controlled substances (including methamphetamine, cocaine, fentanyl) within Manitoba.

During the course of this drug trafficking investigation, information regarding the unlawful possession of stolen firearms was attained. On June 18, 2020, a search warrant was executed at a residence in the RM of Rockwood where police recovered stolen firearms, stolen property and methamphetamine. As a result, Roy Mitchell Dziedzic was charged with multiple offences.

On August 14, 2020, Jillian Elizabeth Joy Carter of Winnipeg was arrested and warrants were executed at two Winnipeg locations associated with Jillian Carter. As a result of the search, police located significant quantities of methamphetamine, cocaine, other suspected controlled substances, and extensive evidence of trafficking. Carter was charged with numerous offences and remanded into custody:

The MOCU continues to investigate this criminal activity.