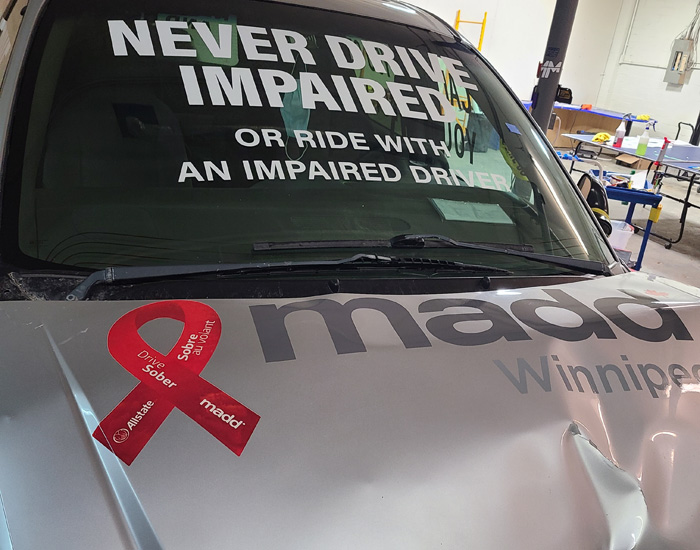 MADD/MPI van with highly visible anti-drinking and driving messaging will be on display in areas of high public traffic.

Impaired driving was a leading contributing factor in at least 18 road deaths according to Manitoba Public Insurance preliminary data as of the end of October. While still below the five-year average of 25 (2015-19), Manitobans are reminded to drive sober as the holiday season fast approaches.

In efforts to raise awareness about the devastating consequences of impaired driving, MPI has resumed its annual Friends for Life Speaker Series, in addition to donating a salvage vehicle to the Winnipeg Chapter of MADD Canada. The vehicle, which has highly visible anti-drinking and driving messaging, will be on display in areas of high public traffic.

“To that end, the Corporation, MPI delivers the annual speaker series: Friends For Life.  The program provides students with real-life stories delivered by individuals who have been personally impacted by a decision made behind the wheel of a car.

“The importance of reaching thousands of youth to create awareness about the consequences of impaired and other risky driving decisions hasn’t changed in the face of the pandemic. That’s why for 2020 we’ve moved to a virtual format so that we don’t miss out on the opportunity to reach Manitoba students,” said Jatana.

MPI is also continuing its annual support of the MADD Canada School Program for middle and high school students. “Our mission is to stop impaired driving and to support victims of this violent crime” said Dawn Regan, MADD Canada’s Chief Operating Officer. “In this year of COVID-19 all of our programs and services that help us deliver on that mission have been impacted. However, thanks to our partnership with MPI we are still able to deliver our educational programming to Manitoba students, albeit many of the programs are now online, helping them to understand the risks of impaired driving and empowering them to make safe choices.”

As of the end of this October, 73 people have been killed on Manitoba public roadways. If this disturbing trend continues, 2020 will be second worst year for road deaths in Manitoba over the last five years: 2016 the worst at 107.

Speed, weather conditions and other factors contributed to the remaining deaths on Manitoba public roadways.