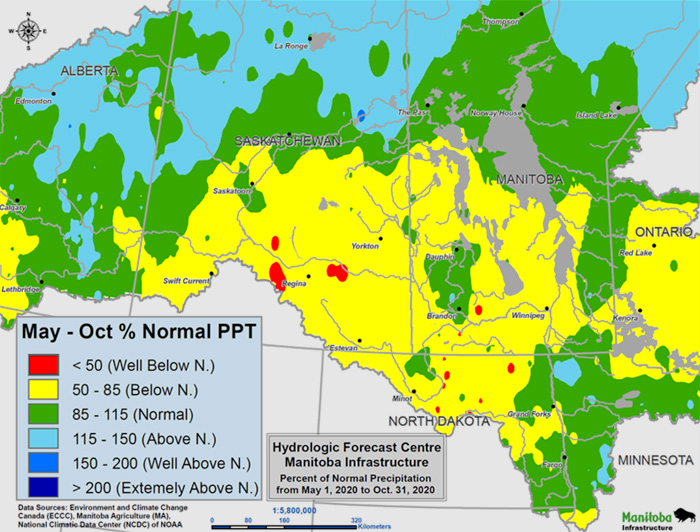 Manitoba Infrastructure’s Hydrologic Forecast Centre has released the 2020 Fall Conditions Report that indicates soil moisture levels before freeze-up are normal to below normal in most Manitoba basins.

“The 2020 Fall Conditions Report describes the hydrologic conditions of Manitoba basins at the time of freeze-up,” said Infrastructure Infrastructure Minister Ron Schuler. “Hydrologic and weather conditions in the winter and spring are the main factors that affect the risk and extent of high water events.”

The minister noted another factor affecting potential spring high water events is the base flow in rivers and the water levels on lakes prior to freeze-up. Base flow is a portion of the stream flow that is not from surface run-off; it is water from the ground, flowing into the river channel over a period of time. Base flows on most rivers are normal to below normal for this time of the year, with the exception of northern Manitoba rivers, where base flows are well above normal to record high.

“We will continue to monitor watershed conditions closely and will release spring flood outlooks through the winter as required,” noted Schuler.