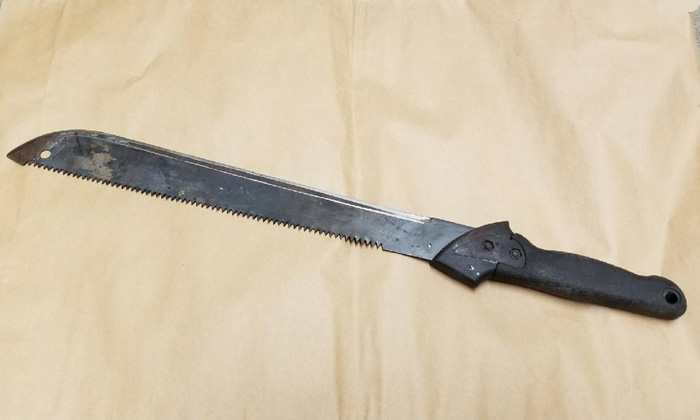 A 27-year-old Steinbach man has been arrested after recently assaulting a victim at a local residence with a machete.

On February 6, 2021, at approximately 9:10pm, Steinbach RCMP received a report that a male was at a local residence uttering threats. When police arrived on scene, an injured male approached officers for assistance. First aid was provided to the victim until EMS arrived on scene shortly after. The 21-year-old victim from Steinbach, who was visiting the residence, was then transported to hospital with non-life threatening injuries.

Police say that while assisting the injured male, other officers observed a male suspect inside the garage of the residence. The male, 27-year-old Jeffrey Jodoin, was seen having blood on his hands and clothing. As a result, Jodoin, a resident of the home, was taken into custody.

Investigation revealed that several people had been drinking in the garage of the residence. Witnesses advised that an argument had broken out between the two men where Jodoin was threatening the victim while holding a machete to his neck causing injury.

Officers noted that blood was discovered on Jeffrey Jodoin’s truck which had been parked on the driveway. Investigating further, officers located a machete inside the truck which was determined to be the weapon that had caused injury to the victim.

RCMP report that Jeffrey Jodoin has been charged with aggravated assault, possessing a weapon for a dangerous purpose, assault with a weapon and breach of recognizance.