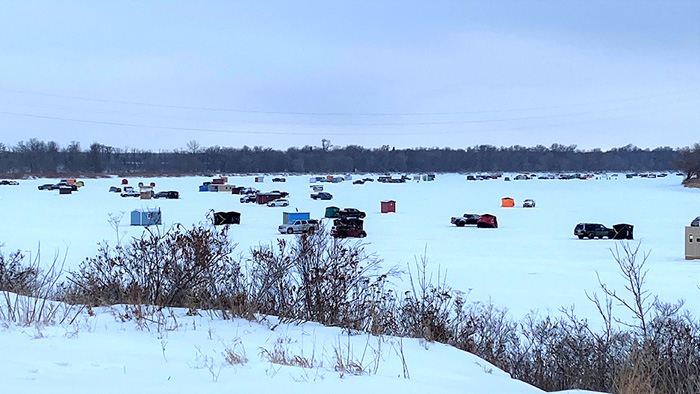 With provincial lakes and waterways populated by outdoor enthusiasts this winter, Manitoba RCMP are reminding the public that consuming alcohol or cannabis while on the ice is illegal.

With health restrictions still in place, and COVID-19 still affecting every aspect of life, Manitobans are using the great outdoors to gather and try to regain some semblance of normalcy. Ice fishing has seen a noticeable rise in popularity this year in southern Manitoba. The lakes and waterways are covered with ice fishing shacks, both permanent and temporary. In many places, the ice is a colourful cacophony of shacks, snowmobiles, and people.

With the increase of people in these areas has come an increase in illegal consumption of alcohol and cannabis. Those climbing numbers lead directly to more people driving to and from their fishing shacks while impaired.

“With all sorts of vehicles out and about, no determined roadway, people skiing, walking, and skating, and places where there is open water, the ice can be a challenge to drive on at the best of times,” said S/Sgt. Kyle McFadyen of Manitoba RCMP Traffic Services. “When a driver is impaired, that challenge becomes downright dangerous.”

So everyone can safely enjoy the surroundings, Manitoba RCMP are reminding the public that it is illegal to consume alcohol or cannabis while on the ice or inside either a temporary or permanent ice fishing shelter. The fine for having open alcohol on the ice is $672. For impaired driving, the same rules apply as if a driver was driving impaired on a roadway. Suspension, loss of licence, even jail time could result, depending on the severity of the occurrence.

With the current public health orders, the province is reminding the public that it is imperative that people continue to practice social distancing and not gather in large groups.