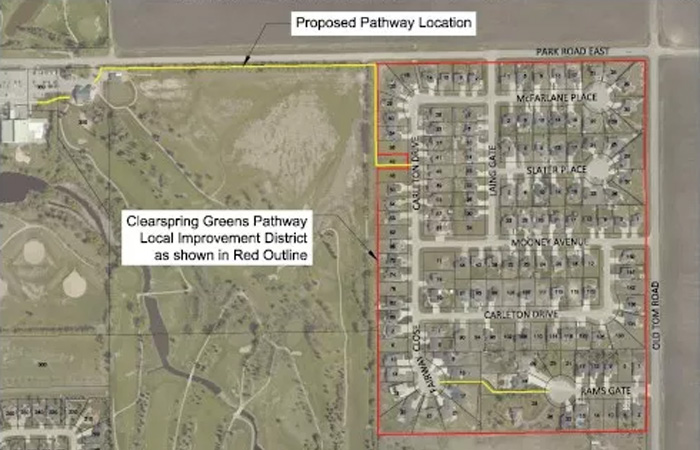 The City of Steinbach has announced that the Clearspring Greens Pathway project approval process will be proceeding. The project would allow for a new pathway to be constructed along Park Road East between Carleton Drive and the Aquatic Centre, and from Rams Gate to Fairway Close.

Approximately one year ago, the initial pathway proposal received 78 objections from residents. At a recent City Council meeting, only six objections were registered against a new pathway proposal, demonstrating the work between the city and Clearspring Greens neighbourhood residents to come up with a plan together that both could support.

Under the new plan, each Clearspring Greens parcel owner will pay 50 per cent of the cost for the asphalt pathway up to a maximum of $1,610. This amount is equivalent to the current sidewalk capital development fee payable on new residential lots developed in Steinbach today.

City Council unanimously approved the plan which will now be sent to the Municipal Board for approval. Upon plan approval, the pathway is expected to be completed in 2021. The total project cost is estimated at $650,000.

The Steinbach CMC Church is a Christian Mennonite church, serving the city of Steinbach, Manitoba.